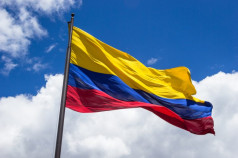 As the whole world takes in the excitement of the World Cup, some people are taking advantage of the event to further their nefarious interests, to say the very least.

Specifically, drug cartels and other narco traffickers have been using counterfeit World Cup merchandise to ship cocaine and marijuana around the world.

On June 22, 14 shirts designed to look like the Colombian national team's uniform were seized by police at the international airport in Bogotá. These weren't just normal jerseys, however, as authorities discovered that traffickers had dissolved approximately five kilograms of liquid cocaine into the shirts. Upon arrival in the Netherlands, the drug would have been extracted from the shirts and turned into a powder before being packaged for distribution.

This seizure follows the report of an Argentinian organization that used fake World Cup trophies in their narco trafficking operation, taking advantage of the heightened travel and global merchandising boom that accompanies the World Cup to transport a variety of illegal drugs.

The Buenos Aires-based group, dubbed "Narcos de la Copa," were caught using the replica trophies for their trafficking operation, from which authorities seized 20 kilos of marijuana, 10 kilos of cocaine, 1,800 doses of crack-cocaine known as "paco," and 400,000 Argentine pesos ($14,819).

So far, this has been a World Cup marred by negative promo-related headlines. By the start of the tournament, customs authorities in Hong Kong had already seized nearly $2 million in counterfeit World Cup merchandise through Operation Goalkeeper. The haul was made up of a variety of goods, including 180,000 pieces of apparel (57,000 of it jerseys), 29,000 bags, 1,000 hats, 50,000 pairs of shoes and 3,000 T-shirts.

In addition to this headline was the news that Mexico's national team captain, Rafael Márquez, was banned from wearing the same branded apparel and using the same branded merchandise as his teammates because of his alleged connection to drug traffickers in his home nation.

While using merchandise for illegal efforts is certainly nothing new, these stories coming out of the World Cup are indicative of the lengths to which traffickers will go to obscure and proliferate their operations. As is par for the course with anything nice in this world, there will always be those for whom such events present lucrative, albeit illegal, opportunities.