Just three years into an agreement that was supposed to last 10, Fanatics is already calling it quits on its deal with NASCAR to sell merchandise at tracks.

According to Motorsport.com, the deal inked in 2015 was a big change from how NASCAR merchandise was previously sold at the events. Before, fans would buy merchandise from team stores outside of the track. But the Fanatics deal created one giant shopping spot, similar to the behemoth merchandise tent at events like the U.S. Open and the Masters. 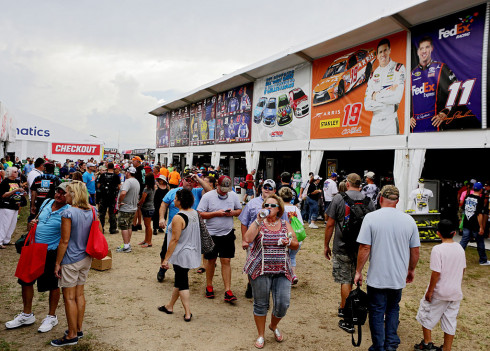 Fans shop for souvenirs at the Trackside Superstore prior to the NASCAR Sprint Cup Series Bojangles' Southern 500 at Darlington Raceway on September 6, 2015 in Darlington, South Carolina. | Credit: Getty Images by Kena Krutsinger

It turns out that NASCAR fans weren't really into the change, and liked going to specific team stores rather than what essentially was a shopping mall for NASCAR gear at the track. The previous sales model, or something close to it, will likely be coming back, according to NASCAR president Steve Phelps. However, Fanatics is still involved with NASCAR's online merchandise sales, something it's excelled at over the last few years with other sports leagues, too.

"In collaboration with teams and tracks, we are in the process of finalizing a plan for a new trackside merchandise model for 2019 that will serve and engage fans at race tracks across the country," Phelps said, according to Motorsport.com. "Although Fanatics has decided to discontinue its trackside relationship, we look forward to continuing our long-term e-commerce partnership as they continue to enhance the ever-growing online and mobile platform for many more years."

Toward the end of the Fanatics merch tent lifespan, the company tried to pivot to something more accommodating for traditional fans by using merchandise haulers to sell souvenirs outside of the tracks, as well as creating "mini-stores" inside spectator gates. It reportedly just wasn't financially viable enough for them to continue.