Having advanced to last year’s Stanley Cup Finals (how I wish, as a Philadelphia Flyers fan, that they had beaten the Pittsburgh Penguins!) and residing in second place in Central Division play this season, the Nashville Predators are vying to become one of the NHL’s most revered franchises. Filling Bridgestone Arena at a 100.6 percent clip—with an average of 17,207 supporters having seen their first 23 home games—the reigning Western Conference champions draw ample support in that quest. So, eager to show her fandom, Philadelphia native Sydney Sanders decided the join the throngs for the team’s Jan. 25 tilt against the New Jersey Devils. The Predators, however, were in Newark, N.J. 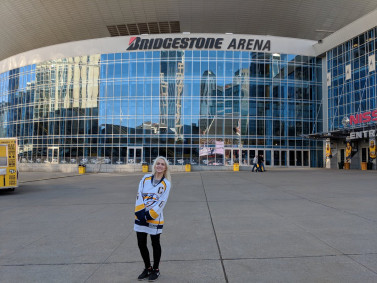 The Nashville Predators made sure that Sydney Sanders appreciated her trip to their fair city. | Credit: Twitter

The Northeast Philadelphia inhabitant reveres her home city’s squad as her favorite (she just scored major points—make that goals—with us) and esteems the Music City occupants as her top Western Conference heroes, thus inspiring a desire to head to Bridgestone to see them make their playoff push. One might wonder why she did not simply settle ahead of the season on seeing the Predators play the Flyers at the latter’s Wells Fargo Center, but they have already squared off in South Philadelphia. (The visitors recorded a 1-0 victory Oct.19.) But Sanders wishes to take in a game at each NHL venue, and because the Devils duel fell the day before her birthday, so she booked a flight to Nashville for what she had thought would be the Predators’ final chance to enthrall their backers before the All-Star Break. Sadly, initially, at least, she managed to prove that there is something worse than being a day late and a dollar short—ending up in the wrong city.

Discovering the error, she pressed on and ventured to Nashville, donning the jersey of former captain Shea Weber, who now plays for the Montreal Canadiens and who inspired the name of her dog. Once outside the Predators’ home, she tweeted her oversight and earned a reply from the club’s Twitter account, receiving some birthday love through a team schedule ("so I don’t mess up that bad ever again,” she told Philly Voice), luggage tag, signed puck, rally towel and scarf. Had she read the slate better, Sanders could have seen the Predators dump the Devils 3-0.

LOOK AT WHAT I GOT Y'ALL 😭💛 pic.twitter.com/arzUF3GKd4

She still intends to catch a game at Bridgestone, and, according to her Twitter account, she remains in Nashville due to an unspecified illness. In a Saturday tweet, she said hospital personnel would be keeping her until today, and she ended the social media post by saying that maybe she could still catch a game. The Predators return to action tomorrow and will host the Chicago Blackhawks, the first team they nudged out of the way in last year’s playoffs, so perhaps Sanders could score a ticket to the game.

No matter when she takes in a game, her benefactors deserve a nod, as they chose to reward her loyalty with merchandise, a move that not only shows character but also attracts brand attention. Numerous outlets have covered the gaffe-gone-good, thus surely making more than a few folks eager to see the Predators succeed. I would take them in a playoff series against any club except for the Flyers, whom they could meet only in the Finals. That would make for an interesting matchup and could, if she does not go to Bridgestone before this hypothetical June meeting, help her reduce her bucket list items by one.

Here in Philadelphia, we do not cheer at all for Sidney Crosby, the captain of the Penguins, but Sydney Sanders could use a few claps if she pulls off her travel plan. Let’s just hope she’s a thorough schedule checker the next time wanderlust strikes.

Sponsor Content American Made for 75 Years: How Bandanna Promotions by Caro-Line Became the Nation’s Only Operation With Four Imprint Methods

Patagonia Will No Longer Add Corporate/Brand Logos to Its Apparel: 'Perfectly Good Gear Ends Up Forgotten'
Comments
The Top Lists