Bobbleheads have become so ubiquitous that we at Promo Marketing, along with conducting a roundup of our favorite stories from this year, could have devoted a recap to our accounts of the eye-catching collectibles. Because of that, one could say we admire the efforts of Brad Novak and Phil Sklar, whose four years of accumulating the goodies has brought them renown and rapport from across the country. The jovial gents will definitely give a nod to everyone’s enthusiasm come March or April, as they will open the permanent space for the National Bobblehead Hall of Fame and Museum.

’Tis the season for awesome events, and baseball fans have been paying special attention to the news, as their teams have been adding top names and releasing their promotional products schedules. The latter endeavor has included the announcement of some to-die-for bobblehead giveaways, thus proving that interest in the collectibles will not soon wane and that Novak and Sklar will likely come to enjoy even more regard as 2018 beckons. 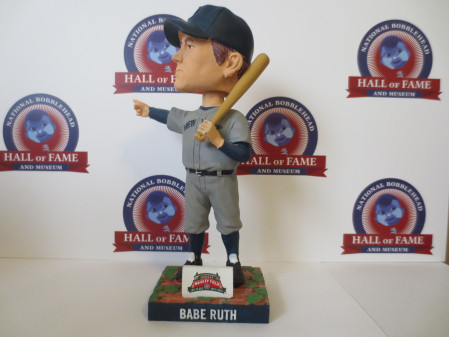 The National Bobblehead Hall of Fame and Museum will hold more than 7,000 collectibles, including this one of Babe Ruth's 1932 World Series Called Shot. (Image via bobbleheadhall.com)

The duo will house the masterstroke idea in the Walker’s Point section of Milwaukee, the city that, through a partnership with a local “urban laboratory,” oversaw a preview bobblehead exhibit from January 22 to April 30, 2016. Nearly 20 months after that run’s conclusion, more than 7,000 bobbleheads will move in unison for the journey from storage lockers to shelves and cases.

“We were originally targeting an opening date of 2016 and thought about doing this at the [Milwaukee] Bucks’ [arena] entertainment district, but it didn’t pan out,” Sklar told the Milwaukee Business News. “We moved in a different direction, and our dream is coming true.”

Collectors since 2013, Novak and Sklar conceived of the museum the next year, and through the aforementioned abbreviated timeframe and their custom and retail business identity, they have become a pair of entrepreneurs certainly worth giving a nod to. While bobbleheads have enjoyed everywhere status at MLB stadiums, the sports world has taken an overall liking to them, but that is not to say that someone who could not tell a pigskin from a puck (that would be an interesting human being, just saying!) would not enjoy a trip to the impending 4,300-square-foot destination.

Though the museum, which will have an adjoining retail shop, will open in the spring, patient aficionados who also happen to love baseball might want to plan to make an August trip to Milwaukee so as to have a shot at this must-have (in our eyes!) promotional product. No matter the degree of one’s wanderlust, Novak and Sklar figure to be as bouncy as the personalities the collectibles depict for all of next year and the foreseeable future.