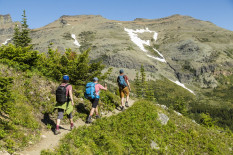 (Image via The National Park Service)

While the Houston Zoo recently outlawed selling bottled water, it looks like the National Parks Service is going in a different direction. According to a press release, the federal government announced yesterday that it will repeal its ban on the sale of bottled water.

The 2011 ban was put into place in an effort to curb litter in national parks, like the Grand Canyon, but it looks like the government has reconsidered its decision. The National Park Service realized that while it banned water bottles, it still allowed the sale of bottled sweetened drinks, so it wanted to give all visitors more hydration options.

“While we will continue to encourage the use of free water bottle filling stations as appropriate, ultimately it should be up to our visitors to decide how best to keep themselves and their families hydrated during a visit to a national park, particularly during hot summer visitation periods,” said Michael T. Reynolds, acting National Park Service director.

Only 23 of the 417 National Park Service sites had implemented the policy, and the new policy is effective immediately. To continue its fight against pollution, the parks will continue to work with partners to provide free potable water in bottle filling stations.