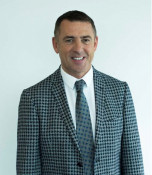 "Peter is the right man at the right time to take the reigns of this great company," Thompson said. "His global operational and marketing experience combined with a deep commitment to our culture of service will drive our continued double-digit annual growth rate. I could not have picked a better successor."

Kelly served as senior vice president and managing director of the company's European operations since 2009, during which time he tripled the company's revenues and quadrupled its profits. Before joining National Pen Company, he held senior leadership capacities at multiple other companies, including Ulster Weavers Apparel Ltd. and Lamont Holdings PLC.

"Dave has been remarkable at the helm of National Pen Company, having nearly doubled revenues globally for the company with impressive profit margins over the past seven years," Kelly said. "This is a testament to the unique offerings and personalized care we're able to provide small- to mid-sized businesses around the world—feats unmatched in our industry. I sincerely appreciate the trust and confidence he, National Pen Company's board of directors and our amazing worldwide team of dedicated employees have placed upon me. I look forward to what we'll accomplish together."