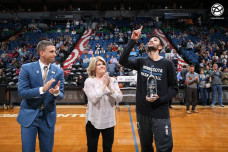 Ricky Rubio, point guard for the Minnesota Timberwolves NBA team, was recognized with the inaugural Flip Saunders Legacy Award, which was created by St. Paul, Minnesota-based Crystal D, for his involvement in the community. Rubio was presented with a Blenheim Award prior to the April 13 game against the New Orleans Pelicans.

The Flip Saunders Legacy Award was created to honor the late Flip Saunders, who passed away prior to the start of the 2015-16 NBA season at age 60.

Saunders was active in the community, and the Flip Saunders Legacy Award honors a Timberwolves player, selected by his teammates, who demonstrates the greatest involvement in the community. Saunders' widow Debbie and their son Ryan, an assistant coach for the Timberwolves, presented the award to Rubio.

The award featured a 3-D image of Saunders inside the crystal. The front of the award was etched and colorfilled in gold, and included the Timberwolves' logo.

“The organization was quite pleased at how well the award turned out,” said Ben Aldritt of Promotion Select, Minneapolis, who spoke to the Timberwolves organization before the award ceremony.