As a money-making machine, the NBA possesses obvious assets in bringing joy to its audience, with stars such as Steph Curry, Kevin Durant, James Harden, LeBron James and Russell Westbrook (what a starting lineup they would make), riveting fans from October through June. While those standouts and their contemporaries specialize in reaching impressive athletic heights, they also welcome opportunities to address social concerns and to acknowledge large-scale contributions to our country’s prosperity. As a sign of solidarity and a call to commend notable achievements, the league and its players association teamed with Nike yesterday to unveil a warm-up shirt that the 30 franchises’ roster members will don throughout Black History Month.

February always serves as an important stretch for professional hoops squads, as busy schedules find them looking to solidify playoff positions or mold the new talent that is helping rebuild designs. Since teams have drawn an average of 17,825 fans through the season’s first 765 contests, this month will not be short on opportunities for players not only to show off but also to assist a great cause. Thanks to 14 words, including “dream,” “empower,” “perseverance” and “unify,” that the competitors chose, the top will make for a powerful pre-game message to arena attendees to reflect what the league deemed their “longstanding commitment to equality and diversity through using the game of basketball to bring people together” and “the influence of black history and culture on basketball and society.” 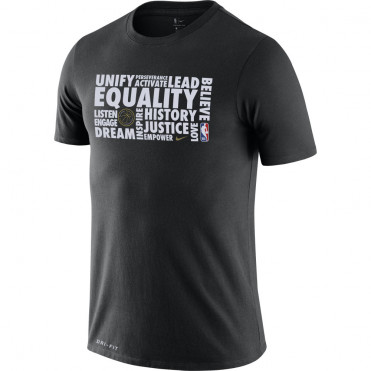 Sales from this Black History Month shirt that NBA players will wear ahead of games will benefit a mentoring organization. | Credit: USA Today

From an emotional point of view, the decision to have the apparel item as a Black History Month commemorator should tug at a few heartstrings, but the greater benefit will come through the donation of sales proceeds to MENTOR.

The league will also support teams in their individual celebrations of the 28-day span, but a garment-centric affirmation of Black History Month, to this scribe, allows for a better display of creativity, notably the handiwork by the Indiana Pacers that went on to dovetail nicely with the NBA’s Martin Luther King Day Jr. warm-up shirts as nods to those who have helped shape our perceptions on race. With 24 games on this weekend’s slate, fans will have ample chances to promote MENTOR’s nearly 4-year-old mission to “fuel the quantity and quality of mentoring relationships for America’s young people and to close the mentoring gap,” and they can spend the rest of the month not only supporting the NBA’s attempt its brands as a slam-dunk source of entertainment and a consummate community partner.

There's Plenty of RBG Merch, Including a 'Fill That Seat' Trump T-shirt

Our 5 Favorite Promotional Products of the Week: Soccer Tees, License Plates and More

California Avocado Commission Is Going Promo-Heavy to Compete With Mexico