By now, basketball fans are used to the sponsor patches on their teams' jerseys. They're pretty subtle—just a little logo near the shoulder. It's not as extreme as a some of the all-over-print advertisements of some soccer clubs or NASCAR uniforms.

But the NBA is going a step further with its sponsorship program by allowing teams to incorporate a sponsor patch on to shooting shirts and warm-up jackets they wear during pregame exercises.

The NBA has approved a 3"x 3" jersey patch on pregame shooting shirts, per @NickDePaula.

Teams may add a Jersey Patch Program partner's additional logo, begin negotiations with another company, or add a team slogan.

Any new sponsors will require approval from the NBA. pic.twitter.com/Vacopq9qN0

"The new additional patch will be 3 inches by 3 inches, and be located either on the currently blank right sleeve, opposite the league's NBA 75th diamond logo, or on the left chest, adjacent to the existing team logo location," the new rule states, according to NBC Sports. "Logo placement will be a team-by-team decision."

So, not every team has to do it, but it means they can. With how normal the sponsor patches are these days, it seems like a no-brainer for a little extra revenue.

Maybe it's because we're writing this from the perspective of soccer fans used to giant sponsor logos, but we don't see the cause for concern that any of this would ruin a team's aesthetic, especially at a time where teams are making apparel and jerseys based on streetwear designed to appeal to collectors in addition to sports fans.

A lot of old soccer jerseys were popular because of their sponsor, too. Think Liverpool's Carlsberg shirts, or Newcastle's "Newcastle Brown Ale" shirt. 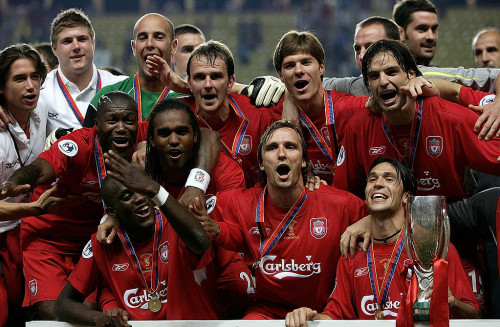 At best, the sponsor can be a vital part of the apparel design, and people will buy the merchandise almost because of it. At worst, it's a small graphic that doesn't intrude much, if at all, on the overall jersey or shirt design.