The NCAA is finally going to let student-athletes to profit off of their names and images being used in profitable ventures. Do you remember the old NCAA football video games, where you'd have to play as QB No. 3 even though you knew darn well that it was Arnaz Battle? Or you'd buy a Maryland jersey with the number 25 and pretend it wasn't Steve Blake? (It's fun to Remember Some Guys.)

Now, under this new rule, student-athletes would actually receive a well-deserved kickback from their names or appearances being used.

The whole reason for the NCAA keeping them from doing so was weird for anyone who actually looked into it for more than, like, a second. It's akin to how the Olympics didn't let professionals compete for a while, so we had to send a bunch of college kids to take on the Soviets in ice hockey.

The new rules are still a little muddy, though. Each division of the NCAA will have to spell out their own guidelines, and there's a rule about how schools can't treat student-athletes differently than non-athlete students—for example, they can't treat the starting point guard as an employee. 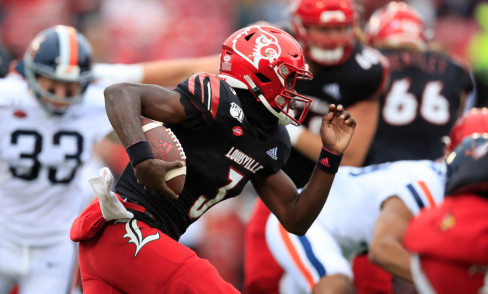 The NCAA announced that it would allow student-athletes to receive financial compensation for their name or likeness being used. | Credit: Getty Images by Andy Lyons

Regardless of the kinks remaining to be worked out, this has been a long time coming and is something both fans and former college athletes have been vocal about. (Unless you're Tebow.)

"We must embrace change to provide the best possible experience for college athletes," said Michale Drake, NCAA board chair and president of Ohio State University, according to NPR. "This modernization for the future is a natural extension of the numerous steps NCAA members have taken in recent years to improve support for student-athletes, including full cost of attendance and guaranteed scholarships."

The timeline for implementation wasn't clear, but last week California passed legislation to stop schools from prohibiting student-athletes from receiving compensation, a law that California governor Gavin Newsom called "the beginning of a national movement."

The NCAA makes a boatload of money annually—more than $1 billion, mostly from TV rights and marketing fees from big events like M*rch M*dness. So, why shouldn't a player be eligible to receive some money for being the one driving the TV traffic? Why can't they sign a deal with Adidas to wear its gear? Especially when these schools are signing apparel and footwear deals with eye-crossing price tags.

For a lot of markets where there isn't a local professional team, college sports is the biggest game in town. Think about your Tuscaloosas, your Lincolns and your Lexingtons. Those schools and the surrounding towns are a built-in customer base.

In places like that, promotional products distributors could see a huge increase in players looking to create merchandise based on their name or likeness. Even if the player is a bust in the pros or never even gets there, college fans love celebrating personalities while they're on campus. (Like Temple point guard Juan Fernandez, for whom I still have a commemorative T-shirt from 2010.)

When the most popular players' faces or names are on T-shirts or jerseys distributed by the schools anyway, why can't they get a little something for it? Seems only fair.

While we're on the topic of remembering some guys, this writer wishes that former Temple point guard Juan Fernandez could have cashed in on the T-shirts with his faces they sold. Some say there are still some collecting dust in a closet in Philadelphia somewhere.

As the legislation moves forward, the NCAA has made it clear that it won't be a one-and-done decree. It's going to take some time to figure out exactly how this will work fairly, and will be an evolving process.

"As a national governing body, the NCAA is uniquely positioned to modify its rules to ensure fairness and a level playing field for student-athletes," NCAA president Mark Emmert said, according to NPR. "The board's action today creates a path to enhance opportunities for student-athletes while ensuring they compete against students and not professionals."

And it's far from a laissez-faire system where players can just chuck their face on whatever they want—at least for now. The NCAA still will have final say on whether the act is permissible. So, for right now, things are pretty messy.

If this isn't a "we have no f___in clue what to do" statement, I don't know what is.. Everybody take a big cleansing breath. Nothing has changed https://t.co/yu3pPaPP7q