Have you all watched “Squid Game” on Netflix yet? You know, the show about people in various stages of financial ruin (be it from amassing gambling debt or simply trying to save their families) turning to a life-or-death game organized by some shadowy organization?

It’s a hoot. A total romp. So, it makes complete sense that people would want to feel like they’re part of the game with customized apparel.

Jokes aside, Netflix really is making customizable apparel related to the show.

According to Complex, fans looking to celebrate the morbid satire can choose from up to 10 different products—one hoodie and nine shirts—eight of which can be customized with either a Korean or English logo, different icons related to the show, and four player numbers representing different characters.

What's really interesting here, though, is the platform. While buyers are limited to a handful of customization options rather than true personalization, several of the shirts offer more than one custom option and location. The interface is easy to use, with everything selected via mouse click and step-by-step instructions listed below each item. 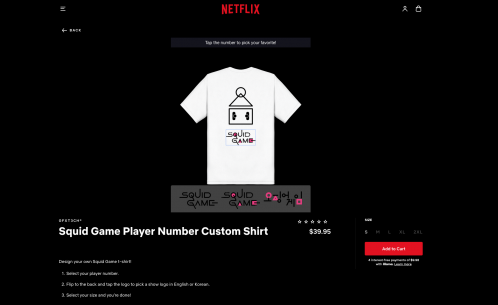 The player number shirts are sort of like T-shirt jerseys, which we're personally big fans of. They’re cheaper than an authentic jersey, more versatile for layering and wearing around town, and still show your team spirit. 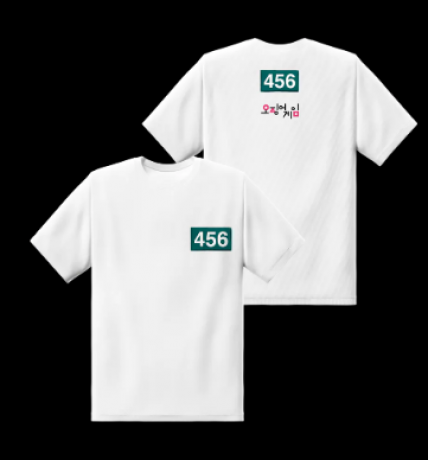 Netflix has recently made branded merchandise a key part of its marketing plan. It just launched an expanded partnership with Walmart, which will now sell licensed Netflix products on a dedicated online hub. It also launched its own online store featuring a rotating line of designer products co-branded with renowned artists and show titles.

Whether “Squid Game” will be renewed for a second season or ends after season one remains to be seen. But Netflix isn’t wasting any time making sure people don’t forget it while it’s still the No. 1 show on the platform.

Get ready for a lot of “No. 456” Halloween costumes this year.