Are These New Adidas Uniforms the Ugliest College Jerseys Ever?

Adidas is usually pretty consistent when it comes to churning out great-looking college uniforms. However, fans are a little confused over its recent reveal of Texas State's football jerseys.

The Texas State Bobcats have been on the losing end of their past two seasons, and perhaps the team is hoping a drastic jersey change will kick a comeback into high gear. The team's new all-gold jerseys also feature white helmets with silver logos. 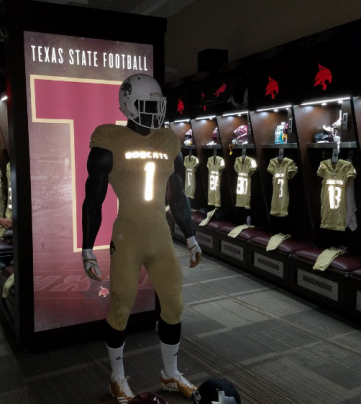 While gold jerseys are nothing new, the all-gold look resembles more of a Power Ranger ensemble. Come on, didn't anyone learn from Cee Lo Green's mistake?

And, to make matters worse, the numbers and letters on the jerseys are made of reflective material, so they appear to glow in the light. Maybe the Bobcats are hoping their new jerseys can distract the opposing team long enough to score a touchdown.