All this information comes as a result of a recent leaked Facebook presentation on the Army's Operation Camouflage Pattern (OCP). So far, there has been no decision on which timeline the service will choose. The Air Force is waiting on a decision from Air Force Chief of Staff Gen. David Goldfein. 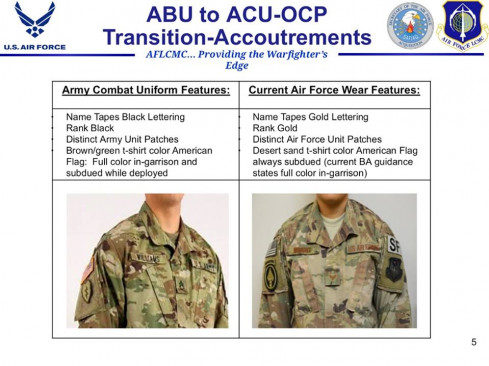 The Facebook presentation pointed to a few obstacles for the transition, including building adequate stockpiles of boots, accessories and appropriate equipment, as well as arranging a buyback or uniform disposal program.

In a recent trip to the base, Gen. Goldfein said his uniform decision is being driven by lethality and readiness.

"What is the battlefield uniform we need to perform that function?" he said. "And if it's OCPs, and that's what we get to, then that's the decision we'll make. But I'm not racing at it because I want to get it right. Because once you make this decision, you better be ready for this decision to be in our Air Force for the next 20 years. So we're spending a lot of time looking at it. We're going to take our time to get it right."

If Gen. Goldfein decides to go ahead with the camo uniform change, it will be the first major switch-up since 2007.