We've been monitoring airline uniforms like they're red carpet get-ups lately. After the American Airlines uniform saga, we're always interested to see what other airlines end up doing with their employee uniforms. So when we heard that it's almost time to check out Alaska Airlines' new looks, we were pretty excited.

According to USA Today, Seattle-based Alaska Airlines plans to unveil its new custom uniform collection at an event at Seattle-Tacoma International Airport. The audience will be made up of 2,000 of the airline's employees, and on stage, there will be 35 staff members showing off the new looks.

Once the employees have seen the new threads, the designs will be unveiled to the public. Currently, the 130 employees who have spent 60 days "wear-testing" the uniforms have been sworn to secrecy. 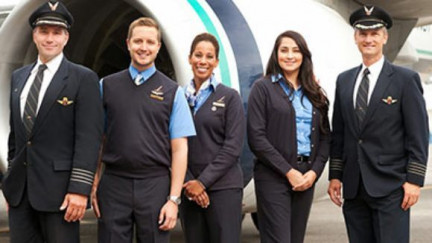 Alaska Airlines' uniforms have not been redesigned since 2011. | Credit: USA Today

Alaska Airlines' last uniform overhaul was back in 2011, so it's probably time for a refresh. At the helm of the designs is fashion designer Luly Yang.

“There’s a lot of curiosity and the employees tell me if someone asks what the uniforms look like they just say its pink with black polka dots,” said Yang.

While Yang is mostly tight-lipped about the new line, she has said that employees will be excited about all the pockets, and that she is proud of the pilot's caps.

Now that Virgin America and Alaska Airlines have merged, Yang had the difficult task of expressing both brand's unique identities, while seamlessly combining the two.

“Virgin is seen as a brand that’s really innovative and fresh and new and energetic, with a lot of movement,” said Yang. “Alaska is seen as a very welcoming, approachable brand that very high touch and is all about service. You bring those two together and you have a perfect mix.”

We can't wait to see what these uniforms look like, and you can bet we'll let you know as soon as the new looks are revealed to the public.