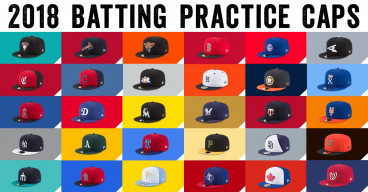 New Era is marketing new caps ahead of the 2018 MLB slate of spring training and regular season games. (Image via Twitter)

We have been without baseball for 26 days, and while fans of the Houston Astros are still celebrating their heroes’ seven-game World Series triumph over the Los Angeles Dodgers, they, along with every other devotee of America’s pastime, must certainly be looking forward to a thrilling 2018 campaign. Though Major League Baseball crowns its champions in either October or November, clubs start to stoke their bases’ expectations in February and March, with Arizona and Florida serving as their preparatory sites. When teams report for sun-kissed slates of exhibition tilts, their smiles will not be their only vibrant possessions as they greet supporters, as the New Era Cap Company will add color to spring training action through its PROLIGHT 59FIFTY caps.

With the free agency quiet period having ended three weeks ago and the Orlando-set winter meetings only 13 days away, expect many notable names to head to new cities and what they hope will be greener pastures. As the powers that be negotiate contracts and finalize trades, owners will definitely be pondering how acquisitions will look in their respective franchises’ uniforms. Thanks to New Era, those switching allegiances, as well as players who will trot out for another season with their present organizations, will figuratively and literally appear far cooler to the masses.

The Buffalo-based entity last Monday launched a line of caps that features fabric 26 percent lighter than that of its Diamond Era hats that diamond dwellers donned from 2013 through the conclusion of this year’s regular season. Like the phased-out headwear, the novel goodies will identify a player’s affiliation in spring training and over the 162-game test of endurance that separates the contenders from the pretenders. In calling on the lightest on-field fabric in the game’s history, New Era, which is hawking the caps through MLBShop.com, is fitting players with tops that feature a matte finish and a performance-comfort sweatband with moisture-absorbing characteristics—perfect components to their attire as they fend off the pressure that some will face as they make postseason pushes.

Though baseball enjoys a time-tested love affair with the public that no sport can rival from a longevity standpoint, it needs to do all it can to continue to court new legions of fans and revenue. To make such a call for their attention and cash, Major League Baseball orchestrated a great move in August through its inaugural Players Weekend celebration, and it will surely hit another grand slam through these caps. An inspection of them yields that eight teams, including our city’s Phillies, will feature new alternate logos on their hats, with the same amount of squads also set to show off new colorways in their designs. Fans of the Detroit Tigers, who will already find themselves spoiled next year as the organization marks the 50th anniversary of its 1968 World Series championship, are doubly blessed, as their American League club will have both additions on the caps.

I am definitely biased but I really like what the Phillies will sport in featuring the Liberty Bell on their tops. Here’s hoping their fortunes will not end up likewise cracked. Being a National League buff, I could not help bit be green with envy over what the Cincinnati Reds are doing, calling on their logo from the 1890s. Yes, the 1890s, everyone! Wow, I love this game! The Colorado Rockies should expect anything but a rocky reception for the nod to their state’s famous mountain range. For American League aficionados, the Kansas City Royals and Toronto Blue Jays could appeal to your fashion senses. Fans of the Seattle Mariners and Tampa Bay Rays, you have my condolences.

As I inspected each cap, I started to think about how particular players, especially National League Most Valuable Player and sure-to-be-ex-Miami-Marlins superstar Giancarlo Stanton, would look in them, and I presume that is part of the pull in New Era’s marketing strategy. Given that the company unveiled these ahead of Black Friday, one can easily conclude that it wants the caps to be big holiday season sellers and means to draw folks to Arizona and Florida for preseason duels and to the 30 MLB stadiums where players will ply their trades come opening day on March 29.

Hats are always going to be hot, especially when they honor sports teams. They are a perfect way to get fans brimming with excitement no matter what they bear because a cap is all about showing pride. Let that connection be your urge to splurge when you are considering a hat promotion, and you, too, will probably circle the bases as a winner.