"Star Wars" is one of the most profitable intellectual properties in the world. Fans of the franchise have been scooping up merchandise in huge numbers even before last year's reboot. As part of the current marketing plan, "Star Wars" fans are able to grab merchandise during the annual "Force Friday" event. Last year, when the new items were rolled out, many were vocally disappointed by how items didn't adequately feature the franchise's female characters, namely the new trilogy's hero, Rey.

This time around, the "Star Wars" powers that be seemed to have learned their lesson.

The Washington Post published a rundown of "Force Friday" items available for this year's event, and female characters, like Rey, Princess Leia and the new Captain Phasma, got a bit more representation than before. 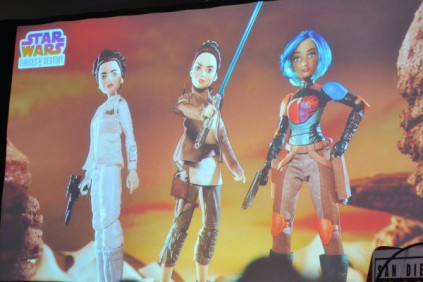 Rey has her own action figures, plush dolls and plenty of T-shirt appearances. She's also a central character in animated print pieces and cartoons. This makes sense because she is, well, one of the main characters of the movie series now.

As we approach the Dec. 15 release of the next "Star Wars" installment, we can expect a steady rollout of every consumer product imaginable with a "Star Wars" twist.

If this "Force Friday" release is any indication of what we can expect, fans can rest assured that the main characters, regardless of gender, will be well-represented in consumer and promotional merchandise.