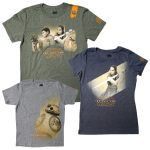 These T-shirts and a pin will begin to sate fans' cries for "The Last Jedi" merchandise. (Image by Forceforchange.com)

In the wake of the December 2015 release of "Star Wars: The Force Awakens," fans of the space opera franchise found themselves frustrated over the merchandise scarcity for Rey, the film's protagonist, a lowly scavenger whose involvement in the fight against the tyrannical First Order reveals a strong connection to the Force. With the box office behemoth's follow-up, "Star Wars: The Last Jedi," to open Dec. 15, Lucasfilm and Disney will not face kindred complaints, as the heavyweights yesterday unveiled three Rey-included items among the four they will hawk April 13-16 at the Orange County Convention Center-situated Star Wars: Celebration.

The Orlando, Fla. gathering will prove not only an amazing experience for the saga's devotees but also a charitable titan, as the aforementioned entities are using their Star Wars: Force for Change brainchild to benefit the U.S. Fund for UNICEF. Twenty-five percent of each product's retail sale price will assist the global outreach program's Kid Power concept through which children assist malnourished contemporaries by earning points that unlock food packets.

Following next month's occasion, the pin and three T-shirts that comprise the merchandise group will be beckoning consumers to make summer journeys to the Sunshine State, as the Walt Disney World Resort will hawk them at Disney's Hollywood Studios, Disney Springs and Magic Kingdom Park, with the Disneyland Resort peddling them at Disneyland Park and the Downtown Disney District.

When inspecting the quartet, enthusiasts, especially those who felt slighted due to the dearth of Rey products when "The Force Awakens" dropped, will no doubt focus on the heroine, who, in in the seventh installment of the franchise, inspired intense speculation over her identity and destiny, especially when she bested First Order commander Kylo Ren and ventured to Ahch-To to locate Luke Skywalker, the chief protagonist in the first three-released movies of what will ultimately be a nine-film feast.

Brandishing a lightsaber, Rey is the epitome of confidence, and her attire indicates deeper immersion into the light side of the Force, the power that binds all lifeforms, that the Jedi uphold. Fifteen months after backers began to balk about the surplus of male character-heavy merchandise, Lucasfilm and Disney have realized the Force is with Rey not only as a huge plot enhancer but also an unstoppable sales motivator.