New York City Is Battling Its Rat Problem with T-shirts

In order to combat the rat problem in New York City, the city's Sanitation Commissioner Jessica Tisch announced a limit on how long trash bags can sit on the street. Tisch said that the rats will hate this plan, but New Yorkers can get excited. They can even purchase a T-shirt to commemorate her speech and show their distaste for the rats of the Big Apple.

Borrowing a phrase from Tisch's announcement, the T-shirt sold by the Only NY brand reads "The rats don't run this city. We do." It shows a cartoonish rat with a red line through it, and the NYC Sanitation department's name.

Tisch's speech got a little help on TikTok, where her choice of words lent itself to memes about dads not turning on the heat or cooks telling servers that certain menu items are discontinued. 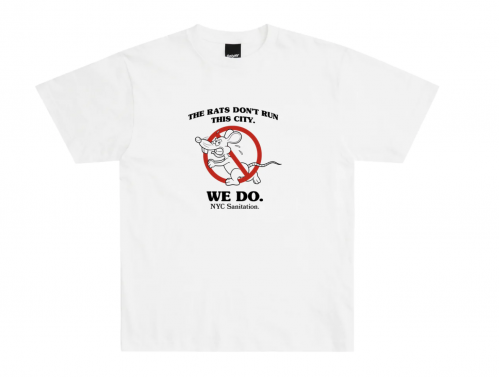 "I knew it was a good line, but I certainly didn't expect it to go viral on TikTok," Tisch said, according to Gothamist. "I think that that line went viral because it's become a mantra for standing up against things that people won't accept anymore in their lives. For me, it's taking on rats, but to each their own."

That's a very generous interpretation of the quote, which was literally about rats. But, such is the world of instant-turnaround apparel. We've seen it with sports moments that were immediately immortalized on clothing, or internet sensations that people wanted to bring into the real world through clothing.

Only is a pretty well-known streetwear brand, so this also taps into the recent trend in promo to create elevated apparel campaigns in limited quantities (and sometimes with higher prices than your run-of-the-mill T-shirt). Only has also created collections in the past for New York City's MTA and the Parks & Recreation department.

It really is a collaboration between the city government and Only. The design was created by a Sanitation Department worker who serves on Brooklyn's Community Board 5, and was created through the city's merchandise licensing vendor NYC&Co.

Additionally, all of the proceeds from NYC agency merchandise go toward New York City's general fund.

"Given that the current administration is investing more in sanitation than ever before, those funds will end up back supporting street cleanliness as well as other essential services," Sanitation Department spokesperson Joshua Goodman told Gothamist.

It's a funny concept for a fundraising initiative. Whether it has staying power as a fashionable piece is sort of irrelevant, too. Once the city gets the funds, it can combat the issue and not worry about whether a T-shirt design is outdated once the rat problem has been handled effectively. Honestly, it would be a good thing for the city if the shirt became outdated. And, as Tisch laid out earlier, the phrase can be applied to other things down the road, too.

But, in the meantime, it checks the boxes of what all sorts of business entities, educational institutions and government bodies should look for with their promotional products: Find something that touches on a cultural moment, work with apparel vendors that people want to buy from (or at least emulate their style of limited releases and high-perceived-value products), and make sure that people know that getting that T-shirt really helps the cause beyond just making someone laugh.