Facing declines in government support of the arts, more and more museums have been beefing up their shops with branded merchandise. While this is nothing new—works of art have been recreated on magnets, prints and postcards for years—a more recent trend can be observed in the sale of more daring, even artist-designed, products for the consumption of the museum-going public.

From tea sets to tote bags, dinner trays to room spray, museums such as London’s Tate Modern and New York’s Museum of Modern Art (MoMA) have turned to a number of products in order to supplement funding and ticket sales.

Tate Enterprises, which manages the museum merch shop, café and publishing arm, brought in £2.8 million (about $3.7 million U.S.) in profit in 2016-17. In the shop, hit products include a Grayson Perry scarf designed for the Tate Modern itself, a Damien Hirst teacup and saucer, and even a Guerrilla Girls air freshener.

At MoMA, a collaboration with Japanese clothing brand Uniqlo has led to increased profits through the sale of T-shirts, tote bags, bandanas and socks featuring works by such artists as Jenny Holzer, Mark Dion and Jackson Pollock.

There’s even an on-brand (gaudy) collaboration between Jeff Koons and Louis Vuitton that has led to the creation of a handbag, tote and rucksack series featuring works by various old masters and modernists alike, including Da Vinci, Degas, Monet and Gauguin. 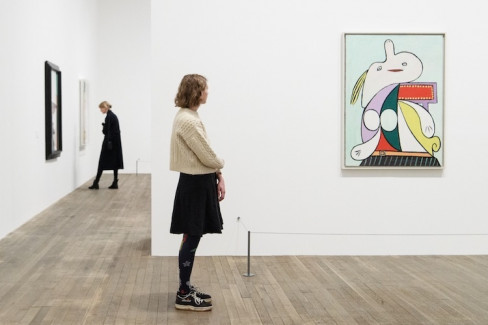 While some artists, such as Perry, design their works for museum shops themselves, others, including those who are deceased, are represented through agencies such as Artestar that connect high-profile artists with international brands that will sell their products in high street shops and major urban shopping districts. Judging by some of Artestar’s clients—Ai Weiwei and the estates of Keith Haring, Jean-Michel Basquiat and Robert Mapplethorpe—and by some of the brands it has struck deals with—Forever 21, Uniqlo and Coach—this is certainly a lucrative business to be in.

It makes sense that many artists and their estates are going through agencies to sell through retail shops rather than simply relying on museum shop sales alone. According to Victoria Hooper, head of copyright licensing at DACs, a not-for-profit organization that negotiates royalties for artists whose work is reused, artists typically pocket a mere 5 percent to 10 percent of the retail price of museum merch, despite huge profits for museums.

In comparison, royalties for high street apparel aren’t much better, hovering around 4 percent to 6 percent according to brand strategist Alex De Ronde. However, in these shops, prices and quantities tend to be higher, which can mean more profit for artists.

For folks in the promotional products industry, it should come as no surprise to hear that merch is making such a big name for itself in the art world. After all, artists and museums have their own brands to support, and this is a world where everyone from fast food brands to airlines have been turning to promotional products for brand impressions and profit boosts alike. It’s about time they caught on!