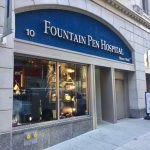 The Fountain Pen Hospital is home to the world's largest selection of pens. (Image via Twitter)

While computers and smartphones have emerged as the champion conveyors of information, many individuals will never neglect the comfort and companionship of a trusty pen. No matter the allotment of love that goes toward maintaining a prized pal, even the finest item will eventually need doctoring. Through the Fountain Pen Hospital, those with an insatiable interest in ink can remedy any cherished possession's ills and rebel against declining regard for writing's allure.

The New York establishment has scripted a 71-year-old existence thanks to the Wiederlight family, with brothers Terry and Steve handling operations as third-generation overseers. Tending to vintage items and contemporary instruments from such entities as Dupont and Waterman, who have deep relationships with promotional suppliers on the high-end gifts and incentives side, the location has proven that though the aforementioned technological heavyweights symbolize speed and the rapid exchange of ideas, pens, with the fountain variety in the ascendancy, will forever epitomize a measured form of communication.

"(A fountain pen) slows you down," store salesman James Hutchinson said in a New York Times profile of the Lower Manhattan haven. "It makes you think about what you're writing."

For many, especially those reared on the instant gratification that computers and smartphones offer, a pen often exists as a last resort, with little consideration going toward its composition, look or feel. In other words, as long as it moves from left to right in a fairly fluid fashion, it will suffice. The Fountain Pen Hospital's therapeutic nature reiterates that the art of transferring ideas to paper has fervent devotees whose thumb, index and middle fingers enjoy forming an unbreakable and easily explainable foursome with the right selection.

Employee Marilyn Brown, whose tenure in the field includes having owned the now-shuttered Arthur Brown & Brother, a longtime market competitor to Fountain Pen Hospital, explained the excitement that fountain pens inspire, concluding the Times piece by saying that "everyone looks to see what he's doing" when a user "unscrews the top of a fountain pen." Having just completed a 72-hour sale, the Empire State spot, whose staff has logged more than 150 years in the business and whose website boasts that it houses the world's largest pen selection, is ready to write the next chapter of its existence one pen stroke at a time.

Sponsor Content Rose Gold: The 'Trend' That Is Here to Stay

Tips for Selling Ballpoint Pens, a Perfect Promo for Your Clients
Comments
The Top Lists