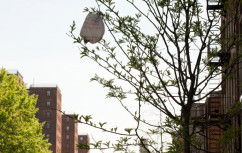 As multiple cities and states look to ban the use of single-use plastic bags, the New York State Senate approved a bill last week that would end New York City's 5 cent fee on the bags.

"Many families have a hard time just getting by, paying for groceries, rent and heat," Simcha Felder, a Democratic senator who represents areas of Brooklyn, said, according to The New York Times. He described the fee as a shake-down that affects people any time they shop.

"This is the type of progressive and environmentally conscious action that helps create a more sustainable city," Contreras told The New York Times. "We are going to continue to work with our partners in the City Council and Albany on implementation of this legislation."

The fee was supposed to take effect last year, but after Felder and others in Albany begun their opposition, legislators planned to amend some of the language.

"Single-use plastic bags are derived from petroleum, and their production, transportation and disposal all contribute to climate change," Jordan Levine, a spokesman for the New York League of Conservation Voters. "Yet a countless number of additional bags never make it to landfills and end up in our streets, trees, beaches, lakes and rivers, where they take millions of years to biodegrade and harm wildlife."