I gained my initial exposure to The New Yorker 17 years ago this month when, as a college senior, I joined classmates in submitting poetry to the publication as it marked its 75th anniversary. While none of us could eventually boast of being a celebrated bard within its pages, nobody had a sour grapes mentality, knowing them’s the breaks of young adulthood. Since that introduction, I have occasionally glimpsed an issue here and there but have not felt compelled to have copies further clutter my residence. In a great example of “Different strokes for different folks,” a half million people have proven the opposite of yours truly and have giddily anticipated its contents through new subscriptions. The 92-year-old Condé Nast product has acknowledged the overwhelming influx by endowing them with customized tote bags that have given those end-users added clout, especially among those who inhabit the Big Apple.

Much like those who have traveled to cherished destinations, eaten in revered restaurants or hobnobbed with elites, individuals who engross themselves in The New Yorker have, well, a tendency to present themselves as a bit more enlightened than those whose literary interests do not take any interest in its pages because of the magazine’s reputation as a thorough chronicler of contemporary society. The overseers definitely know their audience, with Condé Nast’s vice president of consumer marketing Dwayne Sheppard reflecting on the surge of subscriptions by saying, “I’ve never seen such high demand for quality journalism and brilliant writers…,” adding that the tote allows them to declare their affinity for The New Yorker’s grasp of the Zeitgeist. 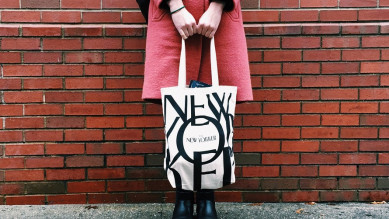 Subscribers have received 500,000 totes for giving their allegiance to The New Yorker. (Image via Market Watch)

“The tote bag is, consciously or unconsciously, a sign of cultural currency,” author Elizabeth Currid-Halkett told Market Watch. “Reading The New Yorker implies possession of rarefied knowledge, cultural awareness and refinement of taste that goes beyond simply reading about world happenings. The tote bag allows one to, even if not intentionally, broadcast one’s possession of such cultural capital.”

Many folks will find her sentiments teeming with bombast, while others will wholeheartedly assert that she has masterfully summarized their tastes. Obviously, editor David Remnick cares more for the latter crowd, and his employer’s means to thank that group have resulted in its being able to classify the bag as its most popular gift ever. Market Watch has noted that the demand for the holder has often succeeded supply figures, with covetous consumers yearning to use the tote to “telegraph tribal membership.”

That is not to say that possessing the bag has transformed all owners into intolerable narcissists, as the Market Watch piece speaks of “self-aware embarrassment.” (I wonder what the equivalent of the bag’s sway would be for residents of our Philadelphia base—maybe a lifetime of free food from a cheesesteak purveyor like Geno’s or Pat’s?) 2017 has been an interesting stretch for The New Yorker’s readership, as many sign-ups occurred at the turn of the calendar just as Donald Trump, a frequent target of Remnick and other personnel, prepared to become the nation’s 45th president.

January yielded more than 100,000 sign-ups for the 47-times-a-year-published magazine, and the ranks have only swollen in the subsequent eight months. Those who have given print journalism a much-needed boost have become the bee’s knees through the tote, which connoisseurs who had let their subscriptions lapse for at least six months and many tenured readers have also acquired. While it resembles any other carryall, its logo-bearing exterior is really driving interest and will likely continue to do so as Remnick and his troops look to put out an updated version this fall.

“The value of The New Yorker bag is what it signifies, not what it actually looks like,” Currid-Halkett said.

Could this tote, no matter how fancy or nondescript it is, be destined to join other iconic New York objects as beloved symbols? Some might think it’s in the bag, while others might deem that possibility too foolish to handle. What’s your stance?