Newspaper Merchandise Has Gone Far Beyond the Tote Bag

Anyone who has seen the classic Mel Brooks movie "Spaceballs" knows one thing: Merchandising is where the real money is made.

In the difficult media landscape of the 21st century, publications need to offer much more than just relevant content and ad space. Brands like the New York Times and the Daily Beast are moving beyond the tried-and-true tote bag offering and going with full lines of apparel and other merchandise for readers to show their preferred media.

This big merchandise boom isn't just to make more money, however—at least in the case of the New York Times. Retail analyst and trend forecaster Charcy Evers told Fashionista that it's a way for the New York Times to stay relevant among the millennial-focused media startups while maintaining its legacy status.

"[Vice and Buzzfeed] are the type of media players doing those things for an alternative revenue stream," she said. "With the New York Times, on the other hand, it's more about signaling a sign of the times, no pun intended."

One thing that sets it apart from companies just looking to make a quick buck is the fact that the merchandise is all pretty high-end, indicative of its perception as the "paper of record." 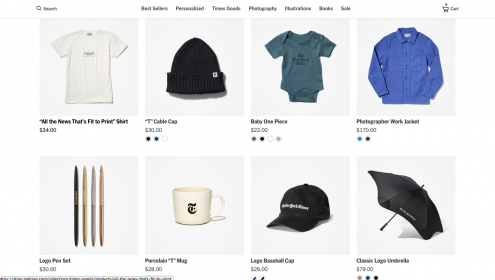 "We're not working with companies who want to slap a logo on a product and be done with it," Steve Mayne, the New York Times' director of commerce, told Fashionista. "They are all serious designers who have their own carefully curated brands, just like us."

Some of these curated items are running for eyebrow-raising prices. Some designer T-shirts, like collaborations with Sacai and Etudes, are listed for about $300 each. (We've seen that go very wrong before, so hopefully the Times was a little more careful in this merchandise rollout.)

"This is so much more than just a hoodie I stole from my boyfriend's closet," Mohar Chaudhuri, a New York-based stylist told Fashionista of her Sacai-designed NYT sweatshirt. "The New York Times uses their influence to inform and create change. In a time when our president mangles the truth, the New York Times [sheds light on] the truth; if this hoodie has any kind of political or social weight to speak on what's real versus fake, then that's amazing. Also, real talk, I do look cuter in this hoodie than my boyfriend, anyway."

The Daily Beast is making things a tad more affordable, with T-shirts running for $25.00 and sweatshirts for $34.99. They come in the standard white, gray and blacks that you can't go wrong with.

So, whether the line is an upscale statement piece or just a method of repping your trusted news source, merchandise for news outlets has gone far beyond just the tote bag.

(And, as someone with a degree in journalism hanging on my wall, I'm for it.)