NFL Conference Championship Merchandise (and the Stuff We Won't See) 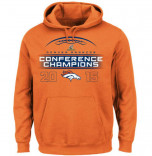 After two heated NFL conference championship games, the Denver Broncos and Carolina Panthers will face off in Super Bowl 50. To commemorate the teams' respective conference titles, fans can now purchase AFC and NFC Championship merchandise, such as hats, T-shirts and prints.

According to Heavy, Panthers fans can celebrate their team's trip to Super Bowl 50 with T-shirts, sweatshirts and coffee mugs.

After the Broncos beat the New England Patriots, Mile High Stadium was flooded with orange and blue confetti, and Broncos quarterback Peyton Manning donned an AFC Championship cap. And fans can get their hands on caps, T-shirts and glassware.

This doesn't mean that the merchandisers correctly predicted the outcome of the game—there is plenty of merchandise celebrating hypothetical Patriots or Arizona Cardinals wins.

According to the Boston Globe, merchandisers, such as Dicks Sporting Goods, will donate the Patriots apparel that falsely names them AFC champions to countries in need.

"The partnership [with nonprofit World Vision] has been longstanding for donating the losing team's championship T-shirts," Matt Catacchio, community marketing manager at Dick's Sporting Goods, told the Boston Globe. "We don't sell the product if the team loses, because they're not the champion."

SportsLogos.net posted a full run-down of Super Bowl and conference championship merchandise, such as pennants, hats, keychains and lanyards, for the Patriots and Cardinals that would have been available had the outcomes of the games been different.