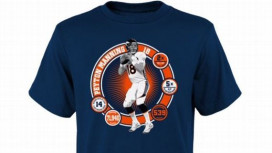 Yesterday, we reported that Fanatics scrambled to get Syracuse University Final Four T-shirts ready as soon as possible. Now, the NFL wants to get in on that instant action with Fanatics. According to ESPN, the NFL extended its deal with Fanatics and set up new guidelines to capitalize on what the league is calling "Micro Moments"—like Odell Beckham Jr.'s insane catch against the Dallas Cowboys.

Chris Halpin, senior vice president of consumer products for the NFL, told ESPN that these moments have a huge effect on social media and pop culture, but only for short periods of time. The goal is to capitalize on those moments as quickly as possible.

"The excitement in every record or amazing play is there, but the half-life of each moment is so short, you have to do what you can to capture it," Halpin told ESPN.

The NFL will work with Fanatics to preemptively get as much merchandise available as they can. This means that when a record potentially could be broken or tied during a game, the two will work to develop products ahead of time.

"We live in an on-demand world," Doug Mack, CEO of Fanatics, told ESPN. "It's not good enough to get the scores in the morning paper, and, in the social media age we live in, fans want what they want now."

To accomplish this, Fanatics will increase its design staff to generate ideas and designs quickly. It also will spend $80 million on technology investments for this venture.

Mack added to ESPN that if certain phrases come about that they want to put on products, Fanatics may trademark them quickly. A lot of athletes already have trademarked certain utterances for their own future uses.