Although the United States is the home of some of the world’s most popular professional sports leagues—each one with around 30 individual franchises—it is unfortunately true that many fans find it hard to support any one team in particular. There are many possible reasons for this, the most common of which is likely geography. The U.S. is a vast, highly populated nation with high concentrations of people living in cities and surrounding metropolitan areas. Accordingly, the majority of professional sports franchises can be found in these cities, far away from the many Americans who live in small towns or the countryside. Others, such as fans in New York and New Jersey, have the opposite problem: an overabundance of teams to choose from.

What choices do these fans have, then, when they wish to choose one particular team to root for? Well, for those folks not as lucky as myself (as a Philadelphian, I’ve been compelled toward loyalty by both fear and admiration) there may be a solution.

One NFL fan decided enough was enough. Tired of having no home team to support, 23-year-old Reddit user The_Champ_Is_Here_14 decided to send all 32 NFL teams a letter announcing his eligibility as a free agent. The goal? To see which team would respond with the most compelling offer.

Amazingly, a total of 14 teams responded with an assortment of letters, signed photos and various promotional items.

In the end, the unnamed fan chose the Carolina Panthers, partly due to a desire to attend graduate school in the city of Charlotte, where the NFL franchise plays. 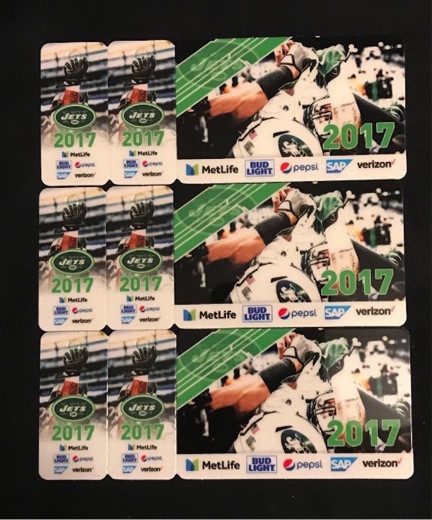 No offense, but why would this guy need three promotional schedules? Isn’t one quite sufficient? Would two have been excessive, yet tasteful? We’ll never know, but it’s absurd to think that three schedules could win over The_Champ_Is_Here_14. Sorry Jets, better luck next year. 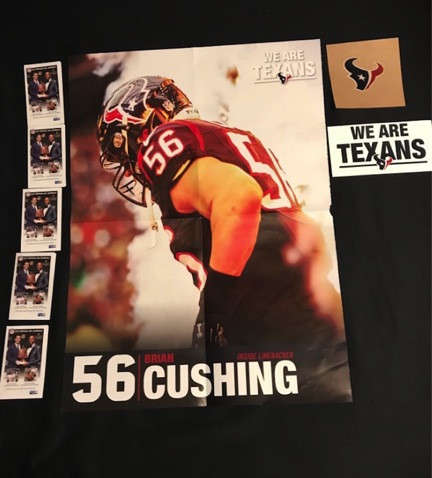 Do I count five schedules? That’s a scandal in my book. The poster is pretty cool, but without a letter, I can’t bring myself to support this offering. 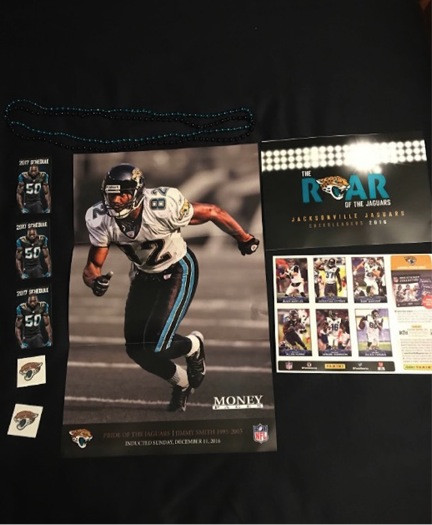 Back down to three schedules. I’m also hoping that those are a pair of temporary tattoos (nice touch, if so). Regardless, The_Champ_Is_Here_14 needs more than a set of beads in exchange for undying loyalty, and so do I (I’d need a heck of a lot more to betray my beloved Birds). 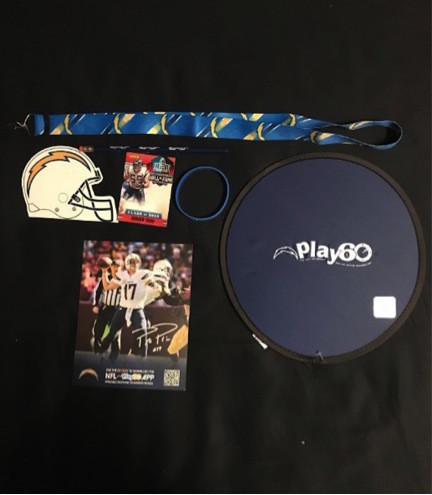 This one makes it here for sheer variety. A sticker.lanyard, pencil, bracelet and Frisbee combo is a force to be reckoned with. (Seriously though, is that a Frisbee or a fold-up hamper? I’d be cool with either, if I’m being honest). 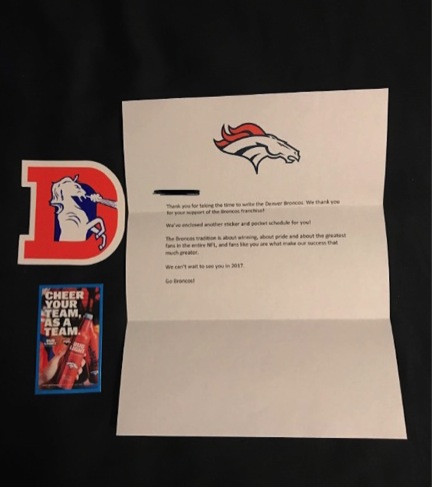 OK, I did say that letters would be a deciding factor in this ranking. If you’re still reading, then shame on me. I’ve had a change of heart, it seems, and though I like the vintage logo and the brief, personal-ish letter, I have to leave Denver behind at this point. 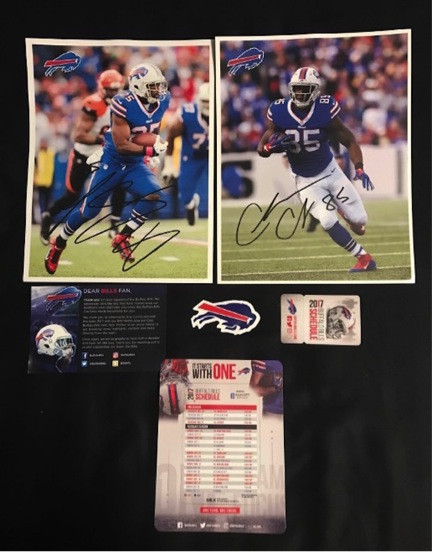 Two signed photos? Shady McCoy (I miss you, even though we’re doing fine without you)? That’s good enough for number 9 on this list-to-end-all-lists. 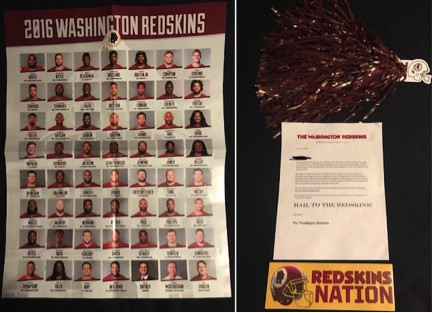 I dislike the Redskins almost as much as I dislike pompoms. The letter is a nice touch, though. 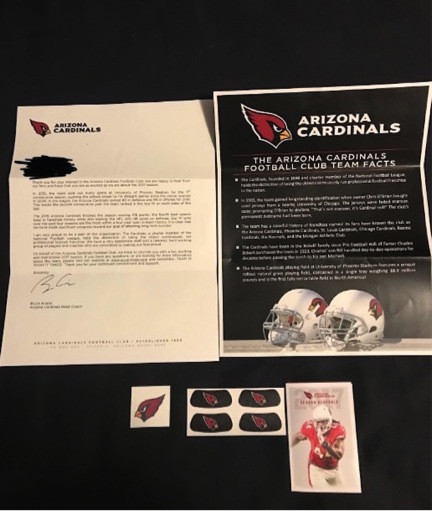 Honestly No. 8 and No. 7 were toss ups for me. In the end, the temporary tattoos put Arizona over the edge. (I really need to confirm that those are actually temporary tattoos, or else I’m going to look pretty dumb.) 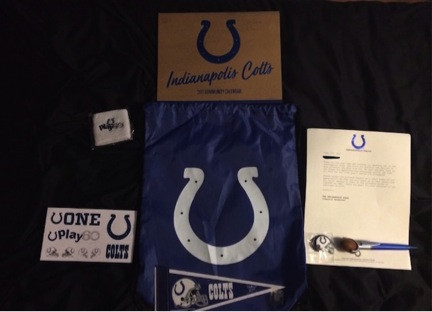 We are now in the presence of elite company, folks. For their selection, the Colts decided to woo The_Champ_Is_Here_14 with a letter, two flags and an assortment of branded swag. It didn’t work, but I like the variety. 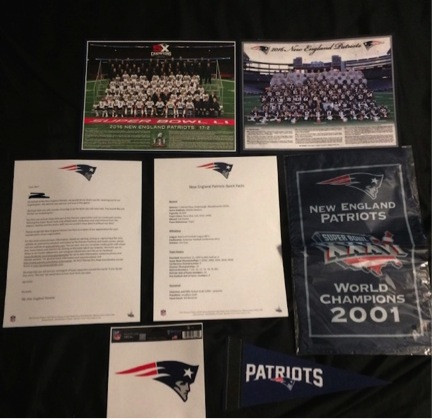 These guys are just good at everything, I guess. Not only did they send a page-length letter and a bunch of photos and stickers, the Pats also included a fact sheet about their team. Yeah, we get it, you win the Super Bowl a lot. Whatever… (signed, a bitter Eagles fan). 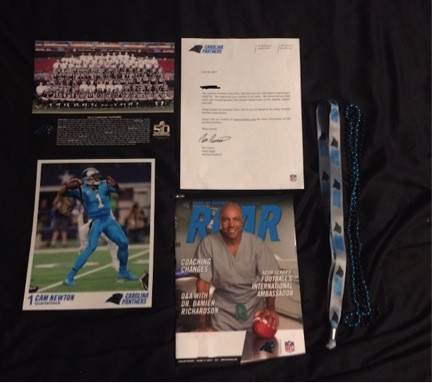 Just a solid performance right here. A picture of star quarterback Cam Newton alongside a roster photo and a team magazine is quite the combination. I still doubt The_Champ_Is_Here_14’s neutrality, though. There were some clear better options that fill out my top three. 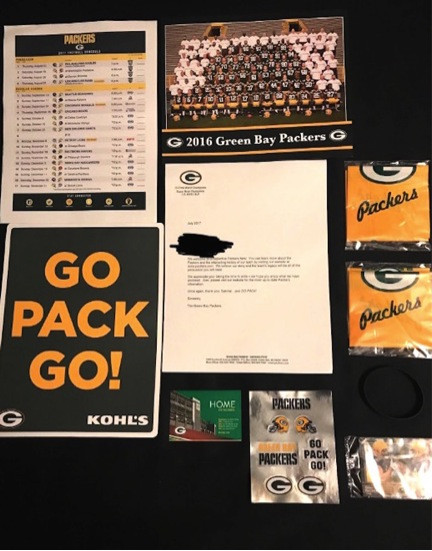 Sign, flags, letter, schedule, stickers, team portrait, bracelet, other unidentifiable objects. Yes, I just listed the obvious contents of the included photo. Yes I’ve pretty much lost the thread of my ranking system. I just like Green Bay, OK? They’re the only fan-owned franchise in the country, and that’s pretty darn cool. 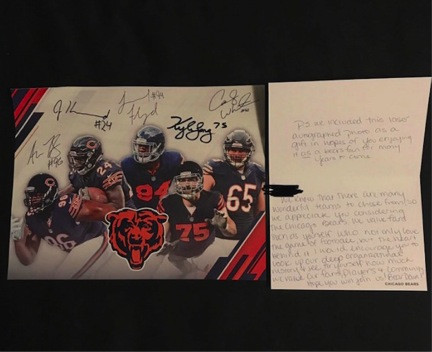 This is just pure class. A signed photo paired with a personal, handwritten note? Now that is an inspiring, faith-in-humanity-reaffirming combination. Maybe this is the obvious choice for No. 1. Maybe I’m a cynic, or just a contrarian. Maybe I can’t believe anyone has read this far… Anyway, here goes. Drumroll, please. 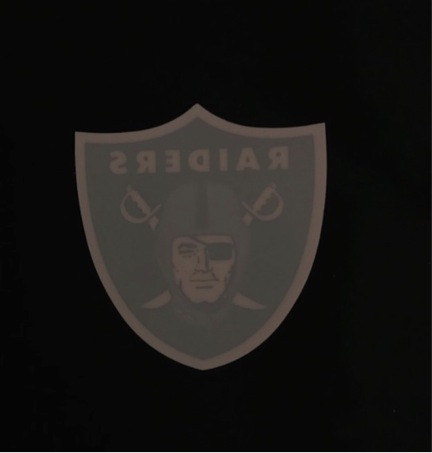 I didn’t choose this selection, it chose me. I was immediately taken aback by its lack of personal attention, its pure, uninterested simplicity. What were they thinking? That’s when I had an epiphany: A single windshield sticker is a brilliant choice. It screams confidence. “Feel free to follow whichever team you like. We’re gonna give you one choice, and one choice only: Decorate your car with our logo, or don’t. We don’t care either way.” Rather than cater to The_Champ_Is_Here_14’s demands, the Raiders turned themselves into the power-player in this situation, showing that only the most loyal deserve to sport their sparse colors and simple logo. I love this selection, and even though it didn’t win The_Champ_Is_Here_14’s heart, it won first place in this distinguished list, and I think that’s pretty good.

If there’s a lesson here, it’s that promotional items can win fans over to teams. A carefully selected collection of giveaways, accompanied with a nice, personal letter, could go a long way in showing fans that the support goes both ways. At the end of the day, I think we can all applaud these 14 teams for their efforts in vying for The_Champ_Is_Here_14’s support.

Oh, and you can applaud me too, if you’d like. You’re welcome for the definitive, unbiased ranking of competitors in Swag Bowl 2017. It was my pleasure.