NFL Backs Down Quietly in Trademark Battle With Barstool Sports 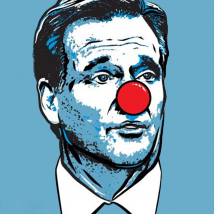 In 2015, Barstool Sports founder David Portnoy and three of his colleagues handcuffed themselves together and sat on the lobby floor of the NFL headquarters in New York City. The reason? The four New England Patriots fans were protesting the league’s treatment of Tom Brady and the Patriots during the so-called "Deflate-gate" scandal. The outcome? The four were arrested, presumably rather easily due to their preemptive handcuffing, and taken into custody. With that, the protest was ended.

Except it really wasn’t. Not content to go gentle into that good night, the folks at Barstool Sports found a way to capitalize on the notoriety this brief protest afforded them. The sports media brand created a line of T-shirts mocking NFL commissioner Roger Goodell, depicting his likeness with a glaring red clown nose. They continued the mockery this year upon learning that the commish would be attending the Patriots home opener at Gillette Stadium in Foxborough by producing 70,000 rally towels with the clown face for fans to wave during the game. Perhaps this wasn’t quite the welcome Goodell would have liked, but after Deflate-gate, it couldn’t have been unexpected.

And so it’s beyond understatement to say that Barstool Sports and the NFL don’t quite get along. While it’s no surprise that the media outlet is banned from attending any official NFL media events or reporting from any games in an official capacity, it’s incredibly surprising to discover that the NFL thought it would be a good idea to infringe on a Barstool trademark with a line of branded apparel.

In December, the NFL released a line of team-branded T-shirts that read “Sundays Are For The [insert team name here.]” While this may have seemed clever to some fans unfamiliar with Barstool Sports, it would have seemed glaringly obvious to anyone else that the slogan was almost identical to Barstool’s famed “Saturdays Are For The Boys” slogan, which the brand has trademarked and uses for a wide range of apparel and branded merchandise.

Predictably, Barstool Sports responded to the infringement, sending a cease and desist letter three weeks ago demanding that the NFL stop the sale of the affronting merchandise and destroy its remaining inventory.

While the NFL never officially responded to the letter, Barstool Sports has claimed victory over the league after noticing that all of the merchandise in question had been removed from the NFL’s online shops.

It’s unclear as to how the NFL got itself into this mess in the first place. Somebody must have predicted that this would lead not only to an embarrassing loss, but also to free publicity for the league’s least favorite publication. After a year of scandals, protests and shrinking viewership, one would think that the NFL would try its best to avoid shooting itself in the foot. And yet, the Barstool legend lives on, for better or for worse.