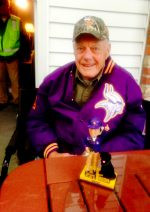 Nobody can ever knock Bud Grant as a dull individual. Set to turn 90 tomorrow, the product of Superior, Wisc. played professional basketball and football, with the latter sport yielding a stint with our city’s Eagles in 1951 and ’52, and coached in the Canadian and National football leagues, winning four Grey Cups with the Winnipeg Blue Bombers and taking the Minnesota Vikings to a quartet of Super Bowls. The legend still nourishes his hankering for hunting, too, and the combination of his professional vocation and retirement pastime have made his Bloomington, Minn. garage sale a hit once again, as the 13th celebration has proven lucky for those fortunate to buy his first bobblehead.

“I think it’s a great picture ­—of the dog,” Grant quipped yesterday in discussing the item that includes Boom, a black Labrador who accompanied the octogenarian on his hunting excursions before cancer made the owner put him down last fall.

The bobblehead, available for in-person purchases through today and via online orders come August, depicts Grant clad in a purple jacket, with a sign noting his 1994 NFL Hall of Fame enshrinement at his feet and the canine to his left. The $150 creation comes from China and will number 500 when the rest arrive by boat. For the 50 consumers who will have walked away from the sale with the autographed keepsake come this evening, the occasion could prove extra special, as the bobblehead’s inspiration might be overseeing his final event.

“At my age, it might be,” he said Wednesday, the initial night of the latest commercial gathering whose other, pricier components include a Vikings roadster and a speedboat painted like a Viking longship. “But I never say never.”

Edina’s Triple Crown Sports Collectibles is helming the deal and will endow Grant with 200 of the goodies. The company’s Joe Florenzano, who will receive the other 300 bobbleheads, had been hoping to immortalize the coach, whose vaunted Minnesota clubs won 158 regular season and 10 playoff contests in his tenure, for more than 13 years. Though grant gave his accord, there was some discord in the matter because the subject wanted the bobblehead to include a weapon.

“I originally had a gun over my shoulder, and the NFL didn’t like that,” he revealed. “I said, ‘It’s not a gun you shoot people with; it’s a shotgun you shoot birds with.’ The guy said ‘It’s still a gun.’ We went around and around, and finally I conceded.”

His suggestion to replace the nixed object with a dead duck did not receive immediate approval, but it is what this week’s purchasers and the impending buyers will view. As for his departed pal, Grant considers the bobblehead a tribute to their friendship. He added a Labrador Retriever, a four-year-old dubbed Deuce, a month ago and has joked that though in training, “…he’s a first-round pick.”