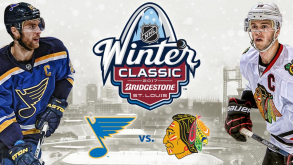 One of the coolest things about the NHL's Winter Classic, the annual outdoor game, is that the two participating teams usually wear special uniforms. Because of this, it's a good opportunity for merchandise sales. The NHL is warning fans to be on the lookout for fakes, however.

This year's game, between the St. Louis Blues and Chicago Blackhawks, will take place at the St. Louis Cardinal's Busch Stadium. The NHL will have officials in St. Louis during the weekend to look for counterfeiters.

"The most important thing that we ask our fans to look for is to keep an eye out for the NHL hologram hang tag or sticker," Jia Wang, an NHL spokesperson, told KMOV. "One of those should be on all of our licensed products."

Jang also said that counterfeit jerseys will fade faster than authentic ones.

The league sent out similar warnings before the 2016 Stanley Cup Finals. We also reported that, after the Super Bowl this year, Immigration and Customs Enforcement's Homeland Security Investigations agents seized about 45,000 counterfeit items, worth an estimated $39 million.