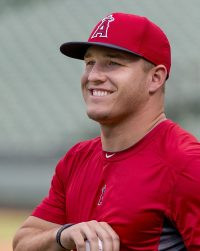 Los Angeles Angels star Mike Trout will need careful stitching if he is to fit The Millville Meteor on his jersey. (Image by Keith Allison via Wikimedia Commons)

As a self-professed academics-obsessed 10-year-old, I decided in 1989 to become more knowledgeable of sports, with baseball easily stealing the most attention while not diminishing my dorkdom (thank God for statistics!). Along with learning the history of the game and watching some pretty wretched Philadelphia Phillies teams for the first four years, I became a fan of nicknames, as a blend of contemporary sobriquets and aged monikers made me applaud the originators’ creativity on a level with the athletes’ talent. The last 28 years have yielded my only handle ("Joe Joe The Shooting Machine" thanks to my eighth-grade basketball exploits) and even more interest in alternate identifiers for sporting performers, and, therefore, I find myself giddy over the news that Major League Baseball will allow its constituents to place nicknames on their jerseys and wear some customized apparel for August 25-27’s Players Weekend.

For the longest time, detractors have dubbed the National Football League the “No Fun League” for its restrictions on touchdown celebrations, limitations that it will relax for this coming campaign. Because of the relative slowness involved in watching a diamond duel, Major League Baseball is ripe for a derogatory acronym or two, with “Makes Life Boring” being a possibility. The overseers know they need to do a better job in selling the national pastime and acknowledging the most visible contributors to the sport. That’s why the idea to transform the benefactors into beneficiaries makes perfect sense and should fetch considerable cash.

The inaugural occasion is the brainchild of the league and its players association and will possibly see the game’s most marketable and affable representatives donning on their jerseys whatever secondary name they have. All you fans of San Francisco Giant Hunter Pence and DreamWorks animation had better hope the right-fielder acknowledges the cinematic success of “Captain Underpants” to emblazon that nickname on his shirt, while I would be gravely disappointed if Bartolo Colon, all 285 pounds of him, refused to have “Big Sexy” added to his Atlanta Braves top. (Hurry back from the disabled list, you lug!)

The jerseys, the sale of which will benefit the entity’s Youth Development Foundation, will join fluorescent-colored cleats and personalized patches honoring instrumental figures from the players’ lives as items the league’s chieftains will call upon to draw attention to their sport. Late last year, Forbes reported that those bigwigs were nearing their 14th-straight year of record-setting revenues. While that windfall certainly owes a nod to their ingenuity, they would not be banking such bountiful bucks if not for the 750 players who comprise league rosters. The late summer weekend, therefore, honors their long-sought opportunity to “express their personal style on the field and capitalize on the intersection of fashion and sports in a way other leagues don’t allow.”

Just how they will don their duds will definitely inspire two months of speculation, especially since they cannot go all out with their selections, as the league has made stipulations about the hues of certain uniform components. Being the only major professional sport fielding teams right now, baseball can certainly knock one out of the park financially and can mimic the National Basketball Association, which decked out the Miami Heat and Brooklyn Nets in nickname-heavy tops for a January 2014 matchup.

How far will athletes test their imaginations? Will anyone come out of nowhere with a new name? Will players with long-cherished signifiers like Toronto Blue Jay Jose Bautista, also known as “Joey Bats,” refuse to participate? Here in Philly, maybe instead of placing any nicknames on their shirts, our Phillies could decide to weave white flags somewhere to reflect their having the game’s worst record.

We are hoping that our franchise, which has called on stars with such nicknames as “The Big Piece,” “The Bull,” “Charlie Hustle,” “Chooch,” “The Flyin’ Hawaiian,” “J-Roll,” “Lefty,” “Nails” and “Schmitty,” moves up a bit in the standings and that center-fielder Odubel “El Torito” Herrera and his contemporaries can sweep the defending World Series champs, the Chicago Cubs, who last year wore track suits featuring a mix of creative and crappy nicknames.