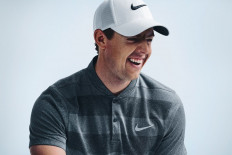 Nike announced that it's going to focus more on apparel, like this Blade Collar polo. (Image via Golf Digest)

When we think back on some of Tiger Woods' biggest accomplishments, we only can picture him pumping his fist in a red Nike shirt, or watching his golf ball pause just long enough to show the swoosh before dropping into the cup. However, Nike announced yesterday that it's phasing out its golf equipment business to focus on footwear and apparel.

"We're committed to being the undisputed leader in golf footwear and apparel," Trevor Edwards, president of Nike Brand, said in a press release. "We will achieve this by investing in performance innovation for athletes and delivering sustainable profitable growth for Nike Golf."

"Athletes, like Tiger [Woods], Rory [McIlroy] and Michelle [Wie], drive tremendous energy for the game and inspire consumers worldwide," Daric Ashford, president of Nike Golf, said. "Over the past year, the MM Fly Blade Polo, the Flyknit Chukka and Air Zoom 90 have all connected strongly with golfers. We'll continue to ignite excitement with our athletes and deliver the best Nike for the game."

Though fans still will see Woods rocking the red every Sunday, the famous swoosh logo will be absent from his golf bag. Woods' agent, Mark Steinberg, told Golf that he was aware of the company's decision, and that Woods will begin looking for a new club sponsor.

"Tiger and I have had multiple conversations about what we'd do, and we have an organized plan in place," Steinberg said to Golf. "He's been a longtime icon of Nike golf, and that's not going to change one ounce. He'll remain a loyal and enthusiastic icon of Nike."

According to CNN Money, Nike plans to offer more apparel sponsorships and has released clothing lines for each athlete in its stable.

The Chase is on. @McIlroyRory #justdoit

It's not an enormous shock to the golf world. Nike only has been making equipment since 1999. But, what this means for distributors looking for the newest apparel is that Nike will have even more innovative apparel and accessories in the pipeline.