Nike Investigates Use of Logo on Racially-Charged Items

Nike is investigating the illegal use of its logo on products branded with a racial slur. BBC reported that items such as gym bags and T-shirts featuring the phrase "Pikey - Just Nick It" surfaced on e-commerce platforms like Amazon and eBay. "Nick" is U.K. slang, meaning "to steal." 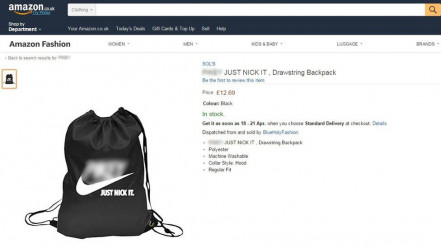 Nike is investigating the use of its logo on merchandise with a racial slur. (Image via BBC)

For the uninitiated, "pikey" is a derogatory term for the Romani Gypsies and Travellers. The clothing furthers a stereotype that they are prone to theft.

Dr. Hazel Marsh, a lecturer at the University of East Anglia and a Romani Gypsy, said she complained to Nike that the products would further the stereotype and encourage hostility.

Nike responded by thanking Dr. Marsh for letting the company know, and saying, "We here at Nike respect and appreciate everyone of our consumers, no matter what their race, age or gender is."

Sherrie Smith, who runs a website where people can report racism against Gypsies and Travellers, said that the term "pikey" can be on par with racial slurs like the n-word.

The term comes from "turnpike dweller," dating back to the 1800s. To differentiate, Gypsies primarily trace their lineage back to India and Europe, while Travellers are mostly ethnically Irish.

"That word is a disgusting word," she said.

"When somebody puts on a T-shirt like that, I look at it and think, 'Is that what people think of me?'" Danniel Bennett, a British hairdresser and Romani Gypsy, told BBC. "It doesn't matter what I do, or where I go, or what I achieve in life, I will always be what that T-shirt says. And that doesn't make me feel good."

After receiving complaints from Gypsy and Traveller activist groups, Amazon had removed two product listings. BBC reported that eBay is in the process of removing listings, and aims to remove offensive material as soon as it's identified. It also plans to suspend the accounts of anyone knowingly selling the items online.