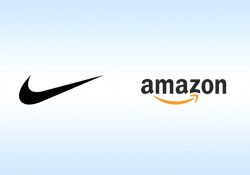 The big Amazon news just keeps on coming. Last week, we reported on the unveiling of Amazon Wardrobe, a new Amazon Prime service intending to convert retail shoppers to online shoppers. This week, The Philadelphia Tribune is reporting that Nike might be cutting out the middleman, and selling directly through Amazon.

You might be wondering why this is big news, since Nike products are already available on Amazon. But those are licensed and unlicensed third party vendors, and Nike's foray into the direct-to-consumer game would be a huge hit to other sporting retailers. Recode reported that competing sports businesses, including J.C. Penney and Foot Locker, have already lost more than $1 billion in market value in just one day after this news broke.

This announcement is just the latest announcement from Amazon targeting retail chains. Just take a look at these charts from FactSet: 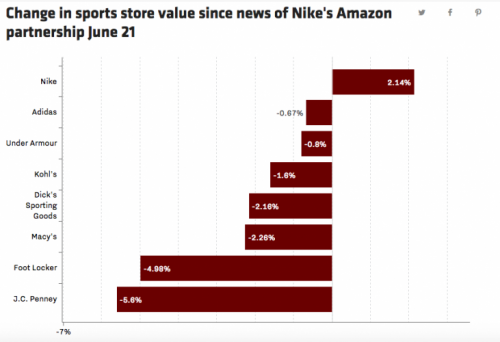 And here's the one concerning the Whole Foods deal: 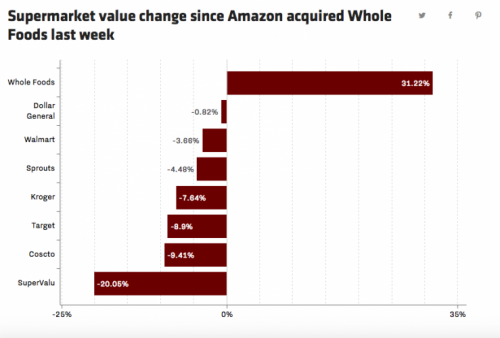 Forbes pointed out that this is a bold move for Nike. It seems to be sacrificing its important, longstanding relationships with specialty running stores in order to fight its way to the top.

However, this move seems like an obvious one for Amazon. The online retailer has clearly been taking drastic steps to amplify its apparel offerings, and a deal with the top athletic apparel maker could mean big changes.