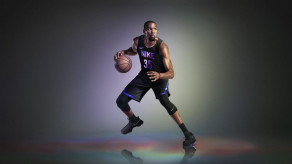 Kevin Durant in the new Nike jersey; image via Racked

Nike unveiled the 2016 Olympic uniforms this week at its innovation summit in New York City, according to Sports Illustrated.

Over the past few months, Nike has worked with athletes and designers to create the optimum jerseys for the 2016 Olympics in Rio de Janeiro this summer.

"We started with the football [soccer] kits and said, 'What if we looked at this as an entire system and not just as an individual shoe or apparel? How do all these components work together as one?'" said Martin Lotti, vice president and creative director for several sports at Nike. "That was true for basketball, track and field, and football. We linked how the socks with the sock liner, how the shin guard connects with the sock. Then the base layer to the shorts. ... It's not about a uniform. It's about a system of speed."

The track and field jerseys for this year focused on aerodynamics in the hopes of increasing athlete speed. This was achieved with Nike's AeroBlades, which are meant to bring down weight. For the basketball kits, Kevin Durant, Oklahoma City Thunder forward, modeled the look in a uniform that is 35 percent more breathable than the 2012 Olympics. Nike added in a FlyVent waistband made from two types of knit mesh for a breathable yet tight waistband.