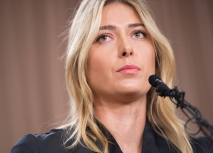 Nike and Tag Heuer have cut ties with tennis star Maria Sharapova after she revealed she had tested positive for a banned substance.

According to The Guardian, Sharapova failed the drug test after she was knocked out of the Australian Open in January. Following the news of her drug test, Nike announced that it would suspend its relationship with her.

"We are saddened and surprised by the news about Maria Sharapova," Nike officials said, according to The Guardian. "We have decided to suspend our relationship with Maria while the investigation continues. We will continue to monitor the situation."

Tag Heuer has had a business relationship with Sharapova since 2004, and her contract ended last December, but now the Swiss watchmaker said it will not negotiate a new deal.

"We have been in talks to extend our collaboration," a spokesperson for Tag Heuer told The Guardian. "In view of the current situation, the brand has decided not to renew the contract with Sharapova."

Sharapova has worked with Nike since she was 11 years old, according to Inquisitr. In 2010, she signed a new, eight-year contract with Nike for $70 million and a percentage of branded clothes.

Forbes reported last year that Sharapova was the highest-paid female athlete in 2015, earning $29.7 million. 2015 was the 11th year in a row that she held that title.

This is the second high-profile athlete with whom Nike has cut ties this year. Last month, the sportswear giant ended its endorsement of boxer Manny Pacquiao after he made derogatory comments regarding same-sex marriage.