This is the first year Nike is outfitting the NBA, after outbidding Adidas for the rights to be the official uniform supplier for the next eight years—a deal worth about $1 billion.

On its debut evening of regular season play, one jersey couldn't handle the pressure of staying on the league's marquee player, and Nike isn't quite sure why.

During the Cleveland Cavaliers' game against the Boston Celtics, Celtics guard Jaylen brown got a handful of LeBron James's jersey, causing it to rip right down the middle, separating the 2 and 3 of his number, ESPN reported. 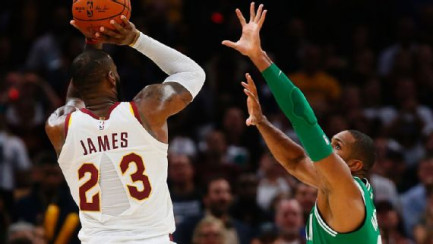 This doesn't look great for Nike, whose big-money deal to outfit the NBA was a pretty big deal, and the Oregon company boasted its products' ability, like faster moisture wicking than Adidas' were capable of.

It's not all bad news though: The NBA will auction James's torn jersey, donating all of the proceeds to hurricane relief efforts. As of last night, bidding was at almost $8,000, with the auction closing on Oct. 26.

So, while it's good that the novelty of a torn jersey worn by the best player in the league (not counting the entire Sixers starting lineup), it's worth Nike's time to figure out exactly why the jerseys are ripping. Otherwise, players could be wearing tattered uniforms by playoff time.