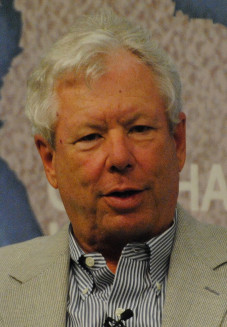 While athletes and authors have always dominated my “I Wish I Could Meet” list, I have lately been pondering adding a few less famous people to the pile, believing that for every imagined conversation with Roger Federer or Stephen King, I should have the hope to exchange thoughts with, say, an educator or a scientist. Thanks to the Nobel committee, I can now yearn for the chance to fraternize with someone who holds both of those titles, as the Stockholm-based body yesterday endowed Professor Richard H. Thaler with its Memorial Prize in Economic Sciences, commending the 72-year-old for, among other endeavors, his investigations of consumers’ preferences, especially with respect to perceived value.

The University of Chicago Booth School of Business presence has pioneered the field of behavioral economics, examining the psychology involved in coming to money-fueled decisions to determine that end-users often make impractical choices, a conclusion that counters traditionally held assertions that they usually use their noggins wisely. In other words, he, his peers and everyone else have much to gain from glorifying imperfection, including acquiring admiration for how, as the New York Times posits, our consistent departures from rationality can be goldmines for experts to anticipate and model.

The publication narrowed down decades of the findings by the New Jersey native, who has held his Illinois-situated faculty position since 1995, to state he has made by living by constructing “a long series of demonstrations that show standard economic theories do not describe actual human behavior.” Relationships obviously have a knack for proving that people are prone to let their hearts and heads clash, and Thaler is touching on unions, in a way, through his investigations. Offering “a bridge between the economic and psychological analyses of individual decision-making,” as the Swedish overseers proclaimed in naming him the victor, he has conceived numerous means through which consumers consider how to make their mark in a given market, and while he definitely deserves distinction (and maybe a few “Thank you” notes) for his looks at such concepts as improving retirement plans, he should merit praise from suppliers and distributors, too.

The promotional products industry obviously relies on individuals’ astute comprehension of diverse preferences to peddle goods and establish camaraderie with audiences. With so many businesses making the ever-subjective “We’re the best” claim, we can narrow down that group by, of course, looking at how much merchandise they move, but we can also address their respect for perceived value. Thaler, along with fellow distinguished economists Daniel Kahneman and Jack Knetsch, did just that in 1990, publishing “Experimental Tests of the Endowment Effect and the Coase Theorem.” Through the classroom-based endeavor, the two distributed coffee mugs to half of the learners and subsequently opened markets for the holders. Thaler and his contemporaries, exploring the theorem’s prediction that about half the mugs would end up traded, noted the observed volume was “always significantly less.” They added, “When markets for 'induced-value' tokens are conducted, the predicted volume is observed, suggesting that transaction costs cannot explain the undertrading for consumption goods.”

This, as the times stated in yesterday’s article on the prize announcement, showed that people place a higher value on their own possessions. That conclusion built on one from 10 years prior, when Thaler, by penning “Toward a Positive Theory of Consumer Choice,” also expounded upon how dear objects are to our hearts when we have ownership of them. It is interesting to discover that the two works inspired backlash among many colleagues, but they have won steady praise, with Kahneman dubbing the former “the founding text of behavioral economics.”

We have all purchased something that, while perhaps not an expensive or even necessary item, has become a cherished gem because of what it has come to mean to us, possibly because it helped up through tough times, outlived perceptions of how long it would last or gave us insights into what we crave as we travel on our finite journeys. We will certainly continue to use a variety of factors to make our picks, and while naysayers will abound, Thaler is saying we should embrace the freedom to add to our possessions and examine our preference. Classes on such autonomy are always in session.