Nobody Buys Music Anymore, So Merchandise Bundles Are the Future 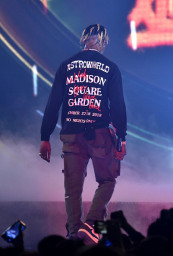 Artists like Travis Scott are reacting to dwindling music sales by bundling their albums with merchandise, sometimes seemingly at a financial loss. | Credit: Getty Images by Theo Wargo

Buying an album isn't just buying an album anymore. Even if you go the classic method and buy an album on vinyl or (gasp) CD, most artists these days have some sort of promotional tie-in to sweeten the deal, or at least make the whole thing more interesting to people who otherwise aren't buying it.

At the bare minimum, artists and record labels are including digital download codes with vinyl purchases, so you don't have to fully commit to the retro lifestyle. But lately, the gimmicks are becoming more intricate, especially in the hip-hop world. Artists are bundling merchandise with their albums for the sake of brand awareness and chart position. Because of the popularity of streaming services like Spotify, Apple Music and even YouTube, the people who actually buy albums are becoming fewer and fewer. To get their music out there, artists are doing things like tying their record in with merchandise.

No matter how many paradigm shifts the music industry goes through, its merchandise will always be popular. People are always going to buy T-shirts from their favorite artists. And, if they spend all of their time listening on streaming services, they're still going to want to signal to the rest of the world what their musical taste is like.

Artists like Travis Scott saw this as an opportunity to use merchandise sales to beef up album sales, albeit a little inorganically.

Bundling has become increasingly pervasive, even on a modest scale. The goal is to boost both chart position—Billboard counts bundled sales in many cases—and revenue: In the streaming era, the margin on selling music has shrunk, but there is still profit to be made from selling clothing.

Nicki Minaj even gave Scott some stick for his methods, saying "What we're not gonna do is have this [expletive] Auto-Tune man [Scott] come up in here selling [expletive] sweaters and telling y'all he sold half a million [expletive] albums. 'Cause he didn't."

Her point would be pretty valid, if she hadn't been getting in on the bundling game herself. Here's the thing: Yes, it's a good way to get yourself on the Billboard charts, which, for an artist trying to break into the mainstream, is crucial. But, the whole point of breaking into the mainstream is pretty much to make a lot of money, isn't it? This is where this tactic gets confusing.

But some artists are bundling albums with merchandise at such low prices that it’s hard to see how they’re making any money at all. Minaj, for example, was selling a T-shirt and album bundle for $15. “Let’s say for $15, you’re selling the album for the lowest retail price of $6.99 and then the T-shirt—at cost—is what, $5?” asks Amir Kashani, co-founder of media and strategy consultancy Salt + Vinegar, which has advised artists on their merch programs. “So you’re making a $3 or $4 margin when they should be selling the whole thing for $30, at least—what fans would pay if they bought the album for $9.99 and a $20 T-shirt. This math is bonkers.”

That's all well and good when you assume the average music consumer is purchasing albums. They aren't, though.

So, the merchandise bundle is more than just a fun way to connect with fans. It's a way for artists to recoup their losses from streaming services. Because these services criminally underpay their artists for the amount of streams their songs rack up.

Malcolm Manswell, who works with the rapper Yo Gotti, told Rolling Stone that artists "need to figure out different ways to make money."

Gavin McNeill, who runs rapper YG's clothing brand 4Hunnid Clothing, said that bundling is one way to add value. "Might as well get them to pay $40 [by adding merchandise], rather than just $10 for the album," he said.

"[Bundles] trick people back into buying full albums," Matt McNeal, manager and A&R for rapper J. Cole's Dreamville Records, told Rolling Stone. "Fans are probably already listening to the album [on a streaming service], but because I sold them this T-shirt, I also get a CD sale within it."

It brings up two other questions: How much is an album really worth? And, how much is that T-shirt worth? The latter question is especially interesting when looking through the lens of promotional products. Promo distributors know exactly how much a one- or two-color screen-printed cotton T-shirt costs. Seeing them at the merch table for $35 might raise a few eyebrows if you know how the sausage is made and you can recognize where these artists are making a solid margin.

For the artists, selling at a lower rate for a T-shirt/album combo is an incentive for people to buy it, but it creates inconsistency in the merchandise and music market overall, and the "suits" might think they could (read: should) be charging more.

Matt Young, executive vice president of Warner Music Artist Services, told Rolling Stone that a solid going rate for a T-shirt album bundle is $25. But artists like Minaj and others have been selling them for around $15.

Rapper Phora was selling a hoodie/album bundle for "$17.99 to $18.99." That's a fair price from a consumer standpoint, but a remarkably low margin.

This isn't even taking into account the cost of actually producing these albums and paying for the marketing and PR campaigns that come with them.

For the artists like Nicki Minaj and Travis Scott, small margins on merchandise aren't going to put them in the poorhouse. They make money from all kinds of other ventures and do enough other things to be fine. But for smaller acts, this is an issue. If this becomes the norm, smaller touring acts and independent artists could be forced to join into a climate that vastly undervalues their products for the sake of not coming off as greedy, but at the expense of their financial livelihood and eventual success.

It's not just in hip-hop, either. Bands like Canadian punk rock band PUP are using album pre-sales for opportunities for bundling merchandise both common and uncommon, like this very awesome inflatable raft promotion:

You can PRE-ORDER MORBID STUFF NOW. Pre-order bundles include: a ton of vinyl colour variants (including a colour-your-own-cover edition!), an annihilation preparedness kit, and, we shit you not, a real human-sized inflatable boat. Limited Quantities!! https://t.co/dyJNeaRQdh pic.twitter.com/tPFy2U3STk

It also solidifies another paradigm shift in music: Don't buy the album. Buy the shirt and we'll give you the album. And you don't have to come to the show to buy the shirt. The music is secondary; the merchandise is what's in focus here. Artists become lifestyle brands that conveniently give out music, too. You have to wonder where their priorities lie, in these situations.

The record company's gonna give me lots of money, and everything's gonna be all right.