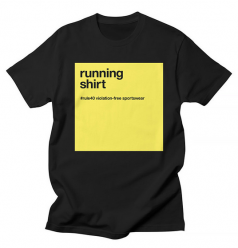 This is one of the Generic Sportswear pieces available from the campaign against Rule 40. (Image via Rule 40)

The 2016 Summer Olympics in Rio de Janeiro kickoff Friday. But as of July 27—nine days before the Olympics officially begin—brands that sponsor specific Olympic athletes, but not the overall Games, are barred from using Olympian terms and branding under Rule 40 through Aug. 24.

Actually, they aren’t even allowed to use so-called “Olympic-related terms”—think “2016,” “Rio,” “effort,” “summer,” “performance,” “medal” and “victory”—in their marketing efforts, Brandchannel reported. Athletes also are banned from mentioning their sponsors if they aren’t official sponsors of the Games.

Why? To give the official sponsors of the Olympic Games and the International Olympic Committee the exclusive use of the terms and the resulting profits.

As you’d imagine, the non-sponsors and their athletes aren’t fans of this rule. Non-sponsors don’t get the benefit of worldwide recognition, and athletes don’t get to earn money from representing those sponsors during such a big event in their careers.

This year, according to Brandchannel, Brooks Running Co., a brand that sponsors a dozen Olympians in Rio, launched a pre-Rio 2016 campaign against the rule.

The campaign, called Rule 40, uses signs and slogans with vague wording to draw attention to the matter. It has even ventured into a line of “generic sportswear.” 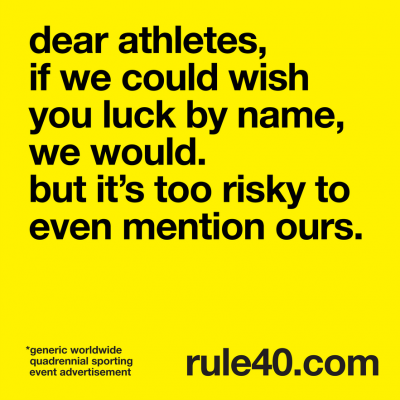 The sportswear line, which consists of T-shirts, tank tops, long-sleeved shirts and sweatshirts, meets the requirements of Rule 40, while simultaneously making a statement against it. Each piece features “Running Shirt” (or “Running Sweatshirt”) and “#rule40 violation-free sportswear” written inside a large, yellow (and attention-grabbing) square.

This is a pretty creative use of branded apparel, if you ask us. What do you think?