'Nonsense': Jelly Belly Says What We're All Thinking in Lawsuit Over Sugar in Jelly Beans

Jelly Belly, the esteemed purveyor of candies both delicious and (intentionally) gross, is in the midst of a minor legal battle with a woman who claims the company misled customers into buying a product filled with sugar.

Jelly Belly’s Sport Beans are advertised as an exercise supplement containing carbohydrates, electrolytes and vitamins. Jessica Gomez, in a lawsuit filed earlier this year in a California state court, says they also contain more sugar than she thought.

That’s because “evaporated cane juice” is listed on the ingredients list. This term is used instead of “sugar” to make Sport Beans more attractive to athletes, Gomez and her attorneys say.

Let's get this out of the way: Yes, we live in a world where jelly beans designed to be eaten as an exercise supplement exist. Mercifully, they are not available in buttered popcorn or chili mango flavors (the flavor list is tame by Jelly Belly standards), though they do contain a number of ingredients theoretically supposed to boost workout performance. If you look at them as fancy vitamins, it's a lot less weird.

“‘Sugar’ is not found in the ingredient list of defendant’s product. Nowhere does defendant explain to consumers (1) that ‘evaporated cane juice’ is not juice and (2) that ‘evaporated cane juice’ by its common and usual name is sugar," reads the complaint, according to Forbes. “By so doing, defendant is able to deceive consumers, including plaintiff, regarding basic nature of the product and its contents.”

OK, we're all about protecting consumers, but this seems like a reach. Sport Beans look just like jelly beans, have the word "beans" right there in the name and clearly display the Jelly Belly logo on the front of the packaging. And jelly beans, as we would all assume, are packed with sugar.

But we don't even have to assume. While "sugar" does not appear on the Sport Beans ingredients list, it does appear on the product's nutrition facts, shown here: 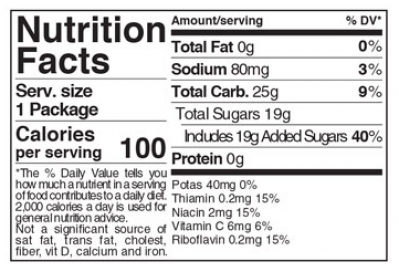 Jelly Belly, in compliance with FDA regulations, has clearly listed the product's 25 carbohydrates and 19 grams of added sugar. A quick glance up from the ingredients list, located just below the nutritional information, is all it would take to verify that, yes, there is a boatload of sugar in Sport Beans.

There is also little reason to expect the product wouldn't contain sugar, a common ingredient in other supposed exercise enhancers. A 24 oz. lemon lime Gatorade has 21 grams of sugar; a chocolate peanut butter PowerBar contains 12 grams. Jelly Belly made no claims, on the packaging or otherwise, that Sport Beans are a sugar-free product.

The candy maker, in an April motion to dismiss, said as much, calling the lawsuit "nonsense."

“No reasonable consumer could have been deceived by Sport Beans’ labeling—Gomez could not have seen ‘evaporated cane juice’ without also seeing the product’s sugar content on its nutrition facts panel," the motion reads. “And she has pled no facts to suggest that athletes, who consume this product to sustain intense exercise, would want to avoid sugar rather than affirmatively seek it.”

Still, Gomez may have two factors working in her favor. First, she filed the lawsuit in California, a state known for its consumer protection laws. And second, the FDA ruled in 2016 that the term "evaporated cane juice" is misleading. That may seem damning, but Forbes downplayed its significance, saying the guidance "lacks teeth." And, indeed, a flurry of lawsuits stemming from the FDA ruling went mostly nowhere.

There's not much to see here for the promo industry, but the Jelly Belly connection makes it worth watching. Several major promo suppliers offer Jelly Belly products. And while none appear to offer Sport Beans, if the court rules in Jelly Belly's favor, it might be a good time to start. The juicy pear sounds delightful.