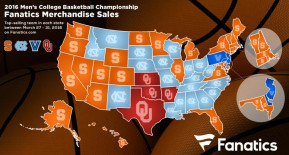 The 2016 NCAA Men's Basketball Tournament ends tonight, with the Villanova University Wildcats facing The University of North Carolina (UNC) Tarheels. While the University of North Carolina is still looking to win on the court, it's already won the battle of merchandise. According to Fortune, UNC has sold the most merchandise since the beginning of the tournament. Even though the Tar Heels are facing the Wildcats on the court, their main competition was fellow ACC conference member Syracuse University.

Fortune reported that, between MArch 27 when Syracuse topped The University of Virginia to make it to the Final Four and March 31, Syracuse merchandise increased 750 percent on Fanatics. Yahoo Finance reported that it's the largest increase of all schools on the site ever. In that same time period, sales of UNC merchandise have increased 200 percent.

For all schools except the University of Oregon, the top-selling item is the Final Four T-shirt, printed with the four teams' logos. (Oregon's top seller is an Elite Eight shirt, since they didn't make it any further than that.)

Yahoo Finance reported that Syracuse's sales boom could be because the school's men's and women's basketball teams both made it to the Final Four in their respective tournaments.

"You have an established school with national appeal also playing the underdog role, which is rare and driving unprecedented sales," Boyle told Yahoo Finance.