So Not Hot: Here Are the Apparel Brands Teens Hate This Year

We'll admit it—it's been a while since we've been teenagers. As such, we're pretty out of the loop about what the teens are into. (They're still into Pokemon and Maroon 5, right?) Thankfully, our favorite survey, Piper Jaffray's "Taking Stock of Teens," is out for spring 2018, and now we know what apparel brands teens like.

The survey revealed what apparel brands the teens are spending their allowance money on. It turns out that Amazon reigns supreme with this age demographic. 44 percent of teens voted Amazon as their top shopping website. 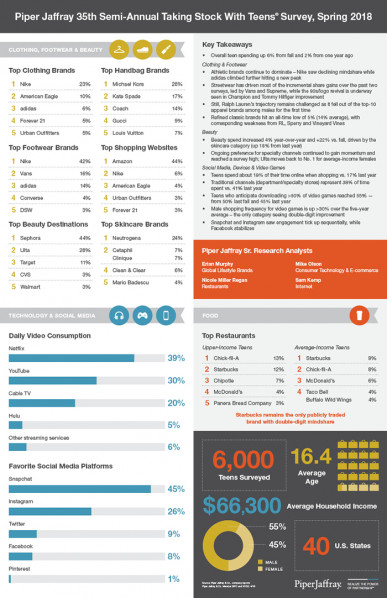 The streetwear category was strong this year, being lead by Vans (the No. 1 footwear brand) and Supreme (the No. 7 apparel brand). Piper Jaffray also concluded that the '90s revival is continuing with brands like Champion and Tommy Hilfiger performing well with the teens.

While Nike had a good outcome in this recent survey, Under Armour didn't receive the same grade. According to Business Insider, the brand has its worst survey performance yet, coming in at 13th place in the apparel brands most cited category. The decline is most severe in the category of footwear, where the brand fell from 14th place to 24th place. Teens labeled Under Armour as the most cited "old" brand that males are no longer wearing, and it appeared for the first time on brands females no longer are wearing. Apparently, only one female in the 6,000 surveyed teens voted Under Armour as her favorite brand. 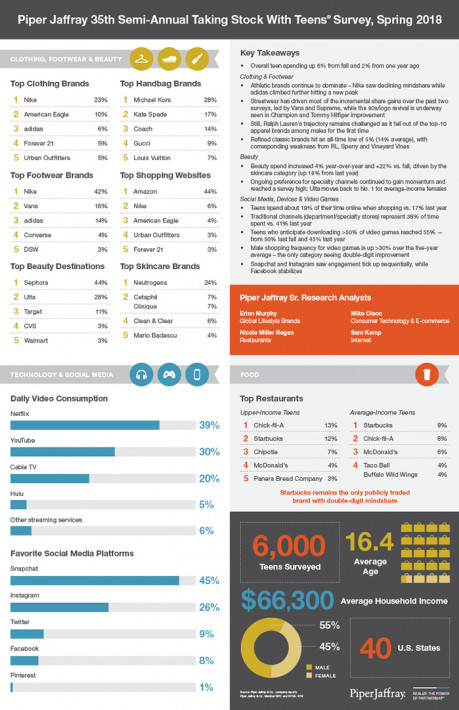 Business Insider also pointed out that Under Armour has been underperforming in other teen surveys recently. In a 2017 survey conducted by Wells Fargo of young male consumers, Under Armour shoes landed in the bottom in terms of favorability.

We've been following Under Armour's decline for a while now, and we've got to say that if it's not performing well with the teens, it spells big trouble.

Ralph Lauren also dropped this year, which is a surprise considering it has held strong in the top 10 since 2002.