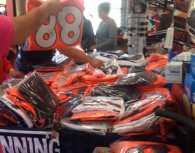 Officials charged four men with racketeering and money laundering after they sold counterfeit Denver Broncos merchandise for nearly a decade. (Image via ICE)

The fight against counterfeit merchandise continues. A Colorado district attorney charged four men with racketeering and money laundering after illegally selling counterfeit Denver Broncos merchandise for the past nine years, and wiring money to Chinese businesses and shell corporations.

The four have been selling merchandise at the Mile High Flea Market in Commerce City, Colo., from Nov. 14, 2006, to Nov. 10, 2015, according to a U.S. Immigration and Customs Enforcement (ICE) press release. A spokesperson for the district attorney told The Denver Post that the four individuals marked the merchandise as official Broncos merchandise, and also counterfeited other Denver professional and collegiate sports team merchandise.

"This investigation uncovered hundreds of thousands of dollars in money wired to China to finance these counterfeit products and more than 20 shell companies furthering this illegal activity," David A. Thompson, special agent in charge of Homeland Security Investigations in Denver, said in a statement. "Not only do these counterfeiting organizations produce inferior merchandise, which is sometimes dangerous, these counterfeits also hurt legitimate businesses in the United States, which can hinder job growth and support criminal organizations around the world."

Related story: Rio 2016 Fights Counterfeiters by Making Its Own Knockoffs