During the 2002-03 season, Ohio State players were promised a gold charm if they beat Michigan. They did, so the players received a one-of-a-kind charm in the shape of a pair of pants. That same season, the Buckeyes went on to win the National Championship. So, for some Ohio State players, those pants are a priceless keepsake from their college football glory days.

For others, it's a way to make a quick buck.

GQ spotted one of the charms on eBay, where it went for $2,550. Apparently this is actually a common thing. 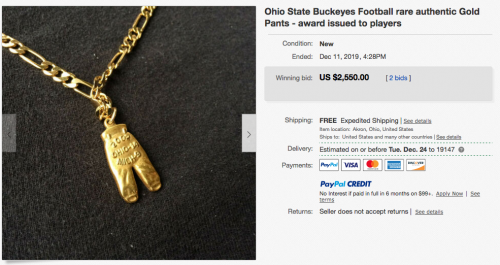 There is a brisk business for gold pants, there is almost always an elegant pair on eBay, and enough digging leads to the bad incidents that led whichever player on the pants to unload the memento for not much money. They are almost always sad stories because selling the gold pants is a reminder of the staggering servitude these players labor under, and that having a gold chain with pants on it is really cool, and if you’re selling it, something has gone wrong.

They also noted that this particular pair belonged to former New Orleans Saints defensive end Will Smith, who was killed in a road rage incident in 2016.

This item's sale is a morbid reminder that every sentimental artifact has a price. And, in a way, highlights the importance these items hold for some people. For the players who kept theirs, it reminds them of a particularly good year for their team. For those who are buying them on eBay, it's a way to relate to their favorite team and players.

In this case, it's a way to remember a former Ohio State great.

Sponsor Content Employee Recognition: Not Just One Day, Every Day