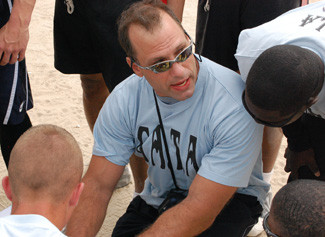 During his 10 seasons in the National Football League, eight as a Detroit Lion and two as a Buffalo Bill, Chris Spielman stopped many frustrated foes in their tracks, tallying 1,181 tackles. The 51-year-old, who earned four Pro Bowl selections for his feats, honed his tenacious demeanor as a two-time consensus All-American at Ohio State University, but the location that played such a vital part in helping him to break through barriers has, ironically, positioned itself as an impediment to his present livelihood. On Friday, the alumnus filed an antitrust lawsuit in federal court, claiming that the school, through a marketing program, is using the images of 64 gridiron greats, his included, minus their permission and has not offered them financial compensation.

“My concern is about the exploitation of all former players across this nation who do not have the platform to stand up for themselves while universities and corporations benefit financially by selling their names and likenesses without their individual consent,” the Ohio native said of seeking to have his alma mater and its licensing partner IMG College scolded for failing to negotiate the use of athletes’ identities for their ultimate economic gain.

His 35-page rebuke, which the U.S. District Court for the Southern District of Ohio is overseeing, also seeks monetary damages for past usage, with any claimed cash destined to assist the school’s athletic department.

“I feel sick about it,” Spielman said of the litigious reaction. “But I believe in doing the right thing. I teach my kids to stand up for what’s right. Players have a right. If somebody wanted to endorse you, don’t you think you have a right to say ‘yes’ or ‘no,’ or to negotiate? That’s a common-sense thing. We want to be partners. We don’t want to be adversaries.”

At least legally so, that’s what they appear to be, as Spielman has taken particular umbrage at the Ohio Stadium-situated banners’ inclusion of Honda’s corporate logo, as he and a local Mazda dealership have a separate sponsorship deal. That imposition on his financial stability is definitely noteworthy, but the overall matter—we cannot overlook the generosity involved in his desire to have settlement money go to sustaining one of the defendant’s departments, though—is of immense severity.

“We notified the university of our concerns in November of 2016 and requested meetings,” former Buckeyes wrestler Mike DiSabato, who made Spielman aware of the banners, said of the squabble. “We had a couple of phone calls with IMG and Ohio State. Initially, IMG pointed the finger at Ohio State, saying, ‘They sold it to us, meaning that in the contract we can (use former players’ likenesses on the banners.)’ A couple months later, (OSU) said, ‘We’ll just take them down.’ We were like, ‘You don’t have to, but it’s good you’re admitting guilt here because if you didn’t do anything wrong, why would you take them down?”

Spielman’s now court-controlled gripe also sues on behalf of DiSabato’s Profectus Group Inc., which represents former college athletes, and names Honda and Nike, whose “Legends of the Scarlet and Gray” vintage jersey-licensing program depicts the plaintiff and other former Buckeyes in all their uncompensated glory, as culpable parties. In refusing to negotiate with him and his football brethren, the defendants and their associates, according to Spielman, made moves that essentially stripped the players’ identity rights of any value. As Honda and Nike paid for the use of the likenesses, those decisions fly in the face of fairness.

The NCAA has long found itself defending its regulations regarding the protection of performers’ rights. This matter, which will surely intensify when football season ramps up, could, based on a Sports Illustrated inspection, prove a pioneer for helping college athletes athletes limit and perhaps even suppress the licensing of their names, images and likenesses. A surplus of such objections, the magazine contends, could convince the Supreme Court to intervene.

Playing devil’s advocate, one could easily, yet perhaps not wisely, say Ohio State and other institutions deserve, with no inhibitions, to profit off the young women and men who fill out their teams’ rosters because of the sizeable scholarships they grant, but what level of freedom should those registrants, their predecessors and successors have in voicing their concerns? Spielman has a straightforward response.

"Ohio State is more than welcome to always use my name and image in any way they want to use it," Spielman said in a Friday radio interview. "The problem comes in when they slap a corporate sponsor on my name and image without my permission, or without giving me the ability to negotiate—or any of our ex-players to negotiate—with that corporation," he said.

What is your take? Will Ohio State University end up parting with the slightly more than $75,000 that Spielman is seeking, a higher amount or nothing?