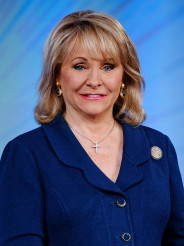 Mary Fallin has served as Oklahoma's governor since January 2011. (Image via Wikimedia Commons)

Many promotional products enjoy long shelf lives, enabling them to earn distinction as gifts that keep on giving. Items dubbed “swag,” such as bags, mugs and stickers, can prove especially endearing, but those goods and other similar endowments have become commodities that keep on giving Oklahoma governor Mary Fallin fits. Looking to address numerous financial matters in the Sooner State, the Republican politician yesterday issued three executive orders to seek solutions, with two tackling educational concerns and the final one looking to curb agencies’ spending on the aforementioned objects.

The “swag”-centric measure comes on the heels of a failed attempt by Senator Rob Standridge to enact a similar cost-cutting plan. An account of his unsuccessful bill notes that the most recent estimate on what Oklahoma entities spend on said products totals $28.5 million, or $300,000 more than the figure when Promo Marketing initially addressed advertising’s role in the state’s budget crisis. While the lion’s share of attention regarding Fallin’s orders will go toward analysis of how they might help or hinder students, the last element will no doubt inspire a few conversations, as Tulsa World reported that June 30 will commence a ban on the purchase of the merchandise and adds that between July 1, 2019 and June 30, 2020, expenditures for “swag” cannot exceed $10 million. That amount obviously represents a significant decline in the amount of financial freedom that bodies will have to draw attention to their services, but Fallin holds that many of the products “are not necessary to the core mission of an agency.”

The aforementioned Promo Marketing look at the economic strain includes excerpts from an opinion piece in The Oklahoman, through which the editorial board contended that “Cracking down on swag—one small piece of a giant pie—would be a start” in helping legislators mount their best attack against a deficit that it reported 11 months ago would hit $868 million. When looking at the intended reduction in “swag” purchases and the colossal size of the debt that Fallin et al face, one might see the proposed slice as a necessary evil. Suppliers, distributors and manufacturers certainly would not share that opinion, and, therefore, the Oklahoma conundrum definitely stands to put them in a bind as the politician and her peers seek to escape their own.

It is easy for Oklahoma officials to offer that the future of their state has never been more at stake, and it is equally simple for promotional products industry presences to counter with the belief that such a sizeable measure will threaten their livelihood. As the ink dries on the order that spares the Oklahoma departments of tourism and recreation, commerce and career and technology education from abandoning purchase plans and as businesses prepare their 2018 product lines, expect the start of the new year to have every involved party resolving to remain afloat.