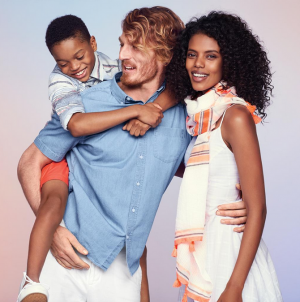 We’ve seen many instances where social media backlash leads to pulled products and corporate apologies. But Old Navy isn’t caving to criticism this time. Because, well, they don’t need to.

On Friday, Old Navy tweeted about a 30-percent-off sale, along with a picture of an interracial family—a Caucasian man, an African American woman and a child.

While some people tweeted racist comments and threats to boycott the store, others championed the brand by tweeting praise, as well as images of their own interracial families, in a show of support.

Through all of this, Old Navy has stood strong.

“We are a brand with a proud history of championing diversity and inclusion,” an Old Navy spokesperson said in a statement to Fortune. “At Old Navy, everyone is welcome.”

Both of the adult models, Clay Pollioni and Grace Mahary, also voiced their support on Instagram.

As Fortune explained, Old Navy’s reaction is similar to a situation General Mills faced in 2013. An adorable TV ad campaign for Cheerios included an interracial family, which brought about similarly racist and hateful commentary. But General Mills didn’t back down. Instead, it put a bigger spotlight on the campaign—featuring the same family in a Super Bowl ad.