I grew up in Camp Hill, PA, just a stones throw across the Susquehanna River from Harrisburg.

So, as Promo Marketing's Central PA representative, it gives me great pride to report that Ollie's Bargain Outlet, a Capital-area discount department store, just broke the Guinness World Record for the largest bobblehead out front of its Harrisburg headquarters on Sept. 28.

The towering version of Ollie's founder Ollie Rosenberg stood 16.5 feet tall and weighed 600 lbs., and was created to celebrate the 40th anniversary of the business. 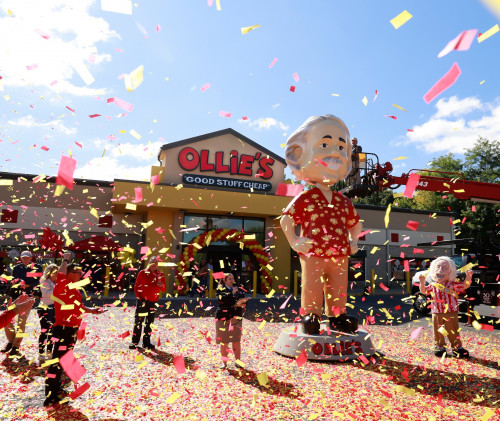 “For 40 years, we’ve been committed to offering huge deals on brand name merchandise, so we wanted to create something big to help honor our anniversary, and what better than a 16-foot bobblehead?” said John Swygert, president and CEO of Ollie’s in a press release.

That cartoonish version of Ollie, who passed away in 1996, has been used as the store's mascot for years.

Anyone who's shopped at Ollie's will get an extra laugh out of this: Ollie's is known for having just about anything you could want (or didn't even know you wanted) on any given day. So, popping up with a world-record bobblehead is, as one Philadelphia Inquirer writer wrote, "as random as most things at Ollie's."

This is as random as most things at Ollie's. I once got a bath mat & a model ship kit there in the same trip. pic.twitter.com/rMysA6OGO2

Here's what might be the most interesting detail about all of this, though: According to Guinness' guidelines, the bobblehead has to be a replica of an existing, normal-sized bobblehead. Ollie's, thankfully, had made more reasonably sized bobbleheads of its mascot in the past. The giant version also had to be fully functional.

This is kind of one of those "why not" promotional campaigns. Yes, it's totally a stunt, and there's no practical use for this bobblehead after the celebration. It won't end up in anyone's home. And if you live in Central PA, you know about Ollie's already and maybe even shop there regularly.

But, it now boosted the store's reputation across the country.

It's also just really fun to say that you have the world-record for the largest bobblehead ever.

"To see this giant bobblehead come to life before our eyes and to have Guinness World Records at Ollie's in Harrisburg today to officially announce that we broke the world record is absolutely thrilling," said Swygert. "We see the World's Largest Bobblehead as a beacon to bargain hunters everywhere that Ollie's is the place to save big on brand name merchandise at up to 70% off the fancy stores' prices, not just on our birthday, but every day."

The previous record holder was Applied Underwriters, according to SI Live, which made a 15 ft. St. Bernard bobblehead in 2016.

This bobblehead is a scaled up version of a St. Bernard, the mascot of Applied Underwriters insurance.

It's the largest bobblehead in the world at 4.69 meters! pic.twitter.com/YLT3mHLfeA

Construction on the giant Ollie took four months, and entailed 3-D modeling, hand sculpting, carving and 10.5 gallons of paint. It's made with "a light density foam material" with a steel interior skeleton, not unlike papier-mâché, with a spring mechanism to make the head bobble.

Nothing creates a sense of hometown pride like an enormous bobblehead of a dude in a Hawaiian shirt. Great job, Ollie's. You've done all of Pennsylvania proud.

More than a Buzzword: How to Cut Through Self-Care's Marketing Noise