They might not be the official “Breakfast of Champions,” but Doritos played a pretty prominent role in hurdler Christina Clemons’ Olympic qualification this week.

After she finished in third place in the 100-meter hurdle at the final Olympic Trials and secured the last spot on the U.S. Olympic team, cameras zoomed in to reveal that Clemons had been wearing dangly earrings shaped like bags of Cool Ranch Doritos. 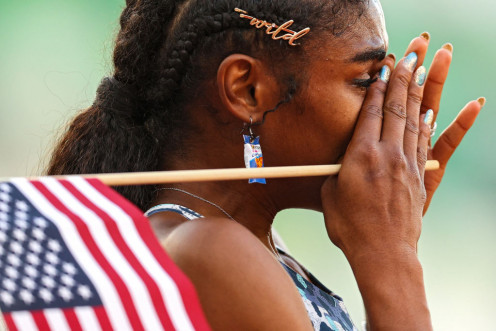 She had gotten them the day before at Hot Topic on a whim.

“When I bought them, I didn’t think it would be a big thing at all,” Clemons told Yahoo Sports. “I was like, ‘Oh, these are so cute.’ I love Doritos and they matched my uniform, so I decided to wear them in the final.”

Much like Michael Phelps’ Subway campaign, it’s safe to assume that Clemons has some Doritos love coming her way, too, thanks in part to social media’s reach.

I made the Olympic team wearing a bag of @Doritos on my ears. Twitter, I need y’all to do your thing! We need to blow Doritos mentions UP 🙌🏾😂 pic.twitter.com/bGyiEcqiOD

To the astonishment of absolutely no one here at PM HQ, Doritos saw it and responded.

Congrats on the accomplishment 👊 Hit our DMs so we can talk

“Someone from Doritos reached out to me saying they would like to talk to me next month,” Clemons laughed.

This is a sports story that otherwise might slip under the radar. It’s already awesome: This is Clemons’ first Olympic qualification at 31. Who doesn’t love to see someone’s dream come true?

But adding in something as small as a pair of branded earrings made this national news that went beyond track and field. You just know that announcers will mention this at least one during the Olympics in Tokyo, and we’d be pretty shocked if Clemons didn’t pull out something Doritos-branded during the Games as a wink-wink nod to her qualification and meme-status moment.

A lot of sports-related promos work that way. Something out of the ordinary or funny happens, and it ends up on T-shirts the next day.

It also shows that the promotional products that leave the largest impression don’t have to actually be the largest products. All it took here was one zoomed-in shot for someone to say, “Wait, are those Doritos earrings? That’s awesome.” And now an athlete is on the cusp of a branding opportunity with one of the biggest snack companies in the business, while the Doritos brand is enjoying national attention.