The Olympics are like heaven for branding. And for good reason. Literally the whole world is watching. What better exposure is there? So, it makes sense that brands want to make their logos as visible as possible (and maybe hide the competition's logos), but this year's games in Rio de Janeiro took branding to new heights (and widths).

This year, the ads on athletes' gear are more visible than ever, thanks to a rule change that allows sponsors to enlarge the labels on gear from 20 square centimeters to 30 square centimeters Companies also can include a second label, which is smaller, CNN Money reported.

This rule allows companies that aren't official sponsors of the games to still make their logos, which sometimes conflict, visible—as we saw in this photo of the U.S. women's gymnastics team wearing their Under Armour leotards under Nike warmup gear. 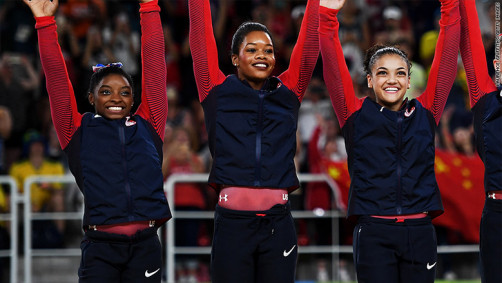 Companies can now put larger logos on gear in the Olympics. (Image via CNN Money)

It isn't just clothing, either. CNN Money reported that the logos can be larger on sports equipment, such as tennis rackets or bikes.

As we reported last week, Michael Phelps had to cover up the Beats logo on his headphones, as it's not an official sponsor of the games. Despite the new rules allowing non-sponsor companies to make their presence known, brands cannot put their logos on certain items, including headphones and water bottles, and they can't place logos on the neck or collar of clothing.

With major sports leagues that already have ads on jerseys (like every professional soccer league), leagues that plan to add them (like the NBA and possibly the NHL), and this trend of growing logos, it might not be out of the question to have a U.S. flag smaller than the Under Armour logo on Olympic uniforms in the future.